The No. 17-ranked Spartans responded Saturday with a hard-fought 76-61 victory over Indiana, snapping a two-game losing streak.

"It was definitely a major focus," said Malik Hall, who led Michigan State with 18 points and six rebounds. "We had a couple of team meetings about it –- players-only and with coaching staff also."

Izzo benched starter Tyson Walker in favor of A.J. Hoggard, and the two finished with 15 and 14 points, respectively. It marked the most combined points by the pair this season for the Spartans (18-6, 9-4 Big Ten), who are one game behind conference leader No. 13 Illinois.

"It wasn’t pretty but it was gritty," Izzo said. "I’ll take gritty over pretty. We’re still a work in progress and I think we taught ourselves our own lesson tonight on what it’s going to take to win in this league." 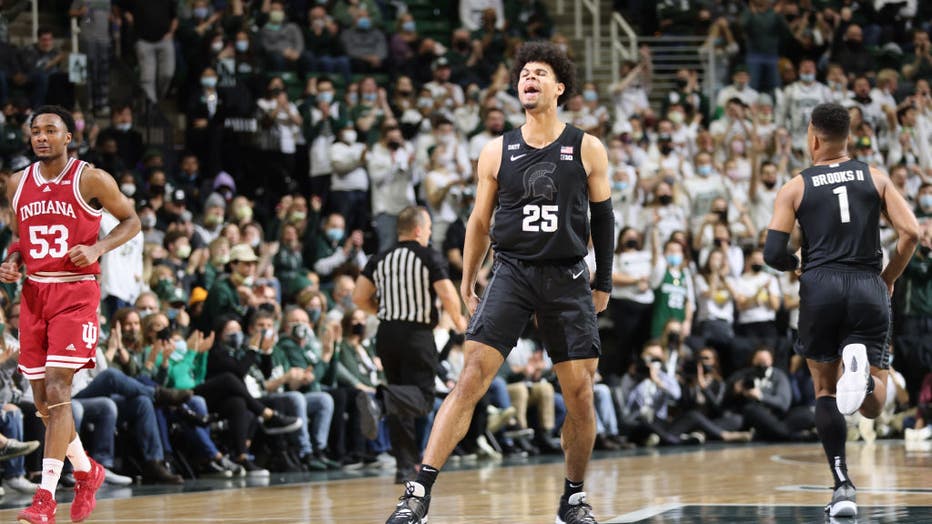 Michigan State used scrappy defense to take control early in the second half, along with a 13-3 run after falling behind 41-40. The closest Indiana could get the remainder of the game was three points with just over nine minutes left. The Spartans led by as many as 18 points.

"We all kind of stayed gritty," Hall said. "They went on a run at the beginning of the second half. We just played really hard and it worked out in our favor."

Indiana coach Mike Woodson was disappointed with his Hoosiers, who hit only 33.9% of their shots, missed 11 free throws and had their bench outscored by a 44-20 margin.

"We’re not shooting the ball very well," Woodson said. "You look at the 3-ball. We shot terribly in that category. We didn’t make our free throws. You just make your free throws, you’re in the game. They made free throws, we didn’t."

The first half was marked by chippy play and poor shooting by both teams, who combined for 20 of 57 from the field. After Indiana tied the game at 29, Michigan State ran off eight of the final nine points to grab a 37-30 halftime lead.

Indiana: The Hoosiers are struggling this season on the road, where they have lost six of eight games. Indiana still has trips to Wisconsin, Ohio State and Minnesota left on the schedule.

Michigan State: The Spartans’ road to a possible Big Ten title is not easy with six games over 16 days. The span includes going to Penn State, Iowa, Michigan and Ohio State, and home matchups with Illinois and Purdue.

The game marked the return of five Indiana players who were suspended for violation of team curfew prior to Tuesday’s 59-51 loss at Northwestern. Those players were guards Xavier Johnson, Parker Stewart, Khristian Lander and Bates, as well as center Michael Durr.

Michigan State head coach Tom Izzo is now within one game of tying the Big Ten record for overall wins by a league coach with at least 10 years in the conference. Former Indiana head coach Bob Knight holds the record with 662. Izzo has 661.

Indiana: Hosts No. 14 Wisconsin on Tuesday before going to Ohio State on Feb. 19.