DETROIT - Matt Harvey extended his shutout streak to 18 1/3 innings, and Pedro Severino homered twice, leading the Baltimore Orioles to a 4-3 win over the Detroit Tigers on Friday night.

Harvey (6-10) allowed six hits in 6 1/3 innings without walking a batter. After a terrible start to the year, the right-hander pitched a third straight scoreless start for the first time in his career.

"This is great, because it is tough to keep going out there and not getting any results," Harvey said. "I can't throw 100 with a 93-mph slider anymore. I have to pitch backward and trust my stuff." 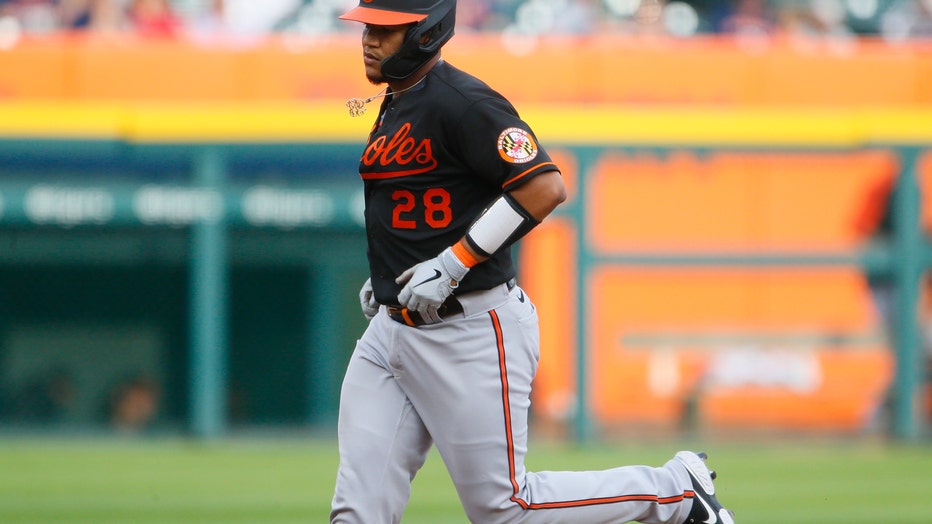 DETROIT, MI - JULY 30: Pedro Severino #28 of the Baltimore Orioles rounds the bases after hitting a solo home run against the Detroit Tigers during the third inning at Comerica Park on July 30, 2021, in Detroit, Michigan. (Photo by Duane Burleson/Get

"I'm really happy for him, because he's had to deal with so many physical problems and he still needs treatment between starts," Orioles manager Brandon Hyde said. "He's got a great slider, he's pitching ahead in counts, and instead of throwing his fastball 96 down the middle, he's hitting 93 on the edges."

Cole Sulser pitched the ninth for his fourth save.

Tarik Skubal (6-10) took the loss, giving up four runs and seven hits in 5 2/3 innings. The left-hander struck out four and allowed three home runs for the second straight start.

"I'm not executing pitches and that's the frustrating part of this," he said. "I'm making too many mistakes over the center of the plate."

Baltimore took a 1-0 lead when Pedro Severino hit the first pitch of the third inning into the second level of shrubs above the 420-foot sign in center field. Ryan Mountcastle made it 2-0 with a solo homer in the fourth.

Miguel Cabrera nearly hit his 498th career homer in the fifth, but had to settle for a double off the out-of-town scoreboard in right-center. Cabrera added a single in the seventh for his 2,941st career hit.

Severino's second homer — the 25th allowed by Skubal — put the Orioles ahead by three runs in the fifth, and Ramon Urias ended Skubal's night with an RBI single in the sixth.

"We just have to remind Tarik that you can't get away with bad pitches at this level," Tigers manager A.J. Hinch said. "He obviously wasn't very sharp tonight and they took advantage."

Harvey left with two one and one out in the seventh, and Paul Fry retired the next two hitters to preserve his scoreless streak.

Detroit rallied with three runs in the eighth.

Derek Hill led off with a triple and scored Detroit's first run on Tanner Scott's wild pitch. Akil Baddoo beat out an infield single and Scott hit Jonathan Schoop before walking Robbie Grossman to bring up Cabrera with the bases loaded.

"Tanner was obviously scuffling, and I didn't want to ask him to face Miggy in that spot," Hyde said. "I thought it was the spot for (Dillon) Tate."

Tate gave up a 420-foot sacrifice fly to Cabrera, who received a standing ovation from the crowd.

"I didn't think it was gone, because it is a long way to centerfield in this ballpark," said Severino, who watched it from behind the plate. "But if this game is in Camden Yards, I think he would have had two more tonight."

Jeimer Candelario bounced into a force at second, but Tate walked Eric Haase on a wild pitch, allowing Schoop to score Detroit's third run and Grossman to take third.

Tate then retired Zack Short to escape the inning with a 4-3 lead.

"We didn't do anything for seven innings, but we came back in the eighth to get one more chance," Hinch said. "We just needed one more hit."

The Tigers beat the trade deadline by sending LHP Daniel Norris to the Milwaukee Brewers for minor-league RHP Reese Olsen. The move came six years to the day after Norris was acquired from the Toronto Blue Jays as part of the David Price trade. Detroit recalled LHP Ian Krol from Triple-A Toledo to take Norris' roster spot.

"The toughest part of this is seeing where this team is now, seeing it rise and how much fun it is to win here," Norris said. "That's one of the reasons I'm really sad about leaving."

The Tigers installed a pair of manual signs listing Cabrera's career hits and homers as he tries to join Albert Pujols as the only active players with 3,000 hits and 500 homers. He would be the seventh player to reach the milestone.