MIAMI - Jimmy Butler knows this Miami Heat team can get much better.

That being said, he's quite happy with the start.

Butler scored 11 of his 20 points in the fourth quarter, added 13 assists and the Miami Heat wasted most of what was a 29-point lead before hanging on to beat the shorthanded Detroit Pistons 117-108 on Tuesday night.

Kendrick Nunn also had 20 for Miami, while Bam Adebayo scored 18 points and grabbed 14 rebounds for the Heat. Goran Dragic also had 18 points for the Heat (7-3), who matched the third-best 10-game start in Heat history.

Butler's 13-assist, zero-turnover game was the fifth in Heat history and the first since Dwyane Wade had one in 2009. 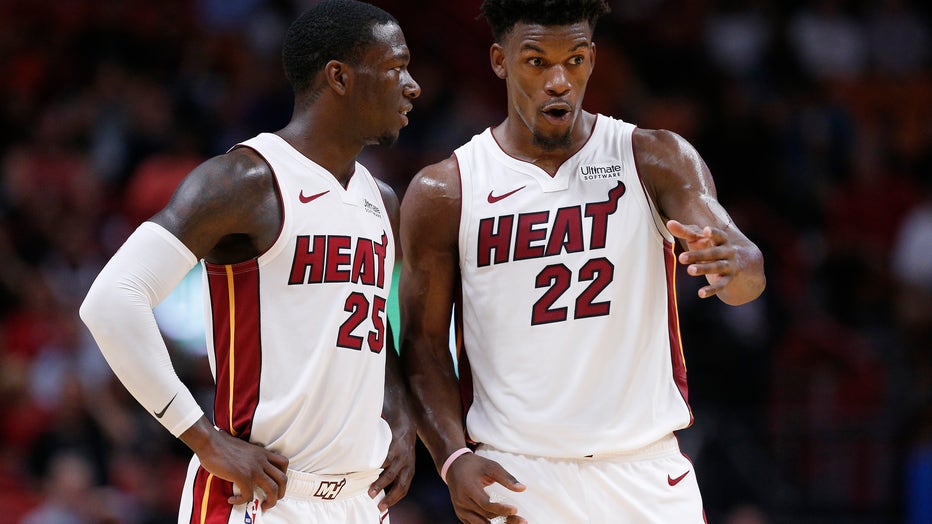 MIAMI, FLORIDA - NOVEMBER 12: Jimmy Butler #22 and Kendrick Nunn #25 of the Miami Heat talk during a break in the action against the Detroit Pistons during the second half at American Airlines Arena on November 12, 2019 in Miami, Florida. NOTE TO USE

Luke Kennard was 0 for 7 in the first half, but recovered to score 22 for Detroit. Andre Drummond had 16 points and nine rebounds before fouling out, and Christian Wood added 16 for the Pistons - who never led, but made the second half plenty interesting by getting as close as seven late.

"NBA basketball games are long," Heat coach Erik Spoelstra said. "And you have to play all the way through to the end. ... But these are good experiences for our team."

Detroit held Blake Griffin (hamstring, knee) and Derrick Rose (hamstring) out, not wanting to play either on a back-to-back after both played Monday.

That wasn't the Pistons' only issue.

Record snow - Detroit's biggest November storm ever, according to the National Weather Service, with 9.2 inches as the official mark and some suburbs reporting more than a foot - made just getting to Miami a problem for the Pistons, who played Monday night at home and then were hoping to be airborne sometime in the 11 p.m. hour.

The Pistons didn't leave their airport gate in Detroit until 2:40 a.m., got in the air 10 minutes later and were at their gate at Miami International Airport at 5:34 a.m. That was more than four hours behind their intended schedule.

"Whether we got in at 11 o'clock last night or 5 o'clock this morning, we've got to have that type of toughness and that type of resilience versus adversity that we haven't exhibited so far this year," Pistons coach Dwane Casey said.

He saw plenty of that.

Detroit got down by as many as 29 in the first half, going into the break trailing 59-37. The Pistons got it down to 13 in the third, only to see Miami push the margin back out to 20 entering the fourth.

Miami's lead was 15 when Drummond fouled out early in the fourth and it still wasn't over. Kennard made a 3-pointer with about 2 minutes left to get the Pistons within 111-103, but the Heat escaped.

"They came out ready to go from the jump and we were relaxing and let them punch us in the face," Pistons guard Bruce Brown said.

Pistons: The 22-point halftime deficit was the second-largest Detroit has ever faced against Miami. The Pistons trailed the Heat 59-36 at the break of a game in 2012. .. Detroit came into the night shooting a league-best 41% from 3-point range. The Pistons shot 15 of 41 from deep on Tuesday.