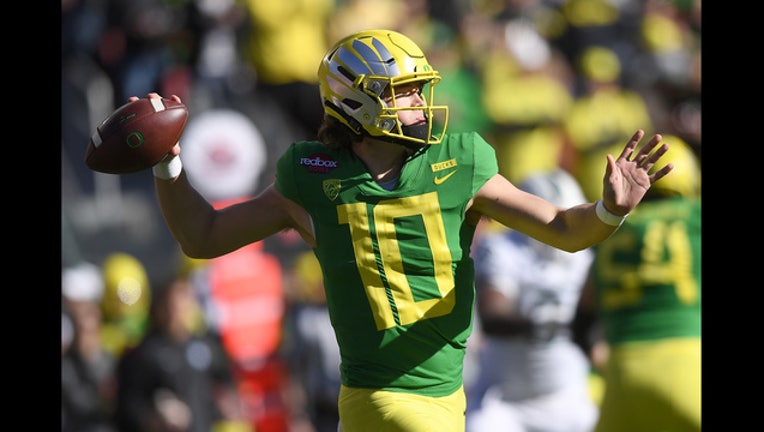 SANTA CLARA, CA - DECEMBER 31: Justin Herbert #10 of the Oregon Ducks looks to pass against the Michigan State Spartans during the first half of the Redbox Bowl at Levi's Stadium on December 31, 2018. (Photo by Thearon W. Henderson/Getty Images)

SANTA CLARA, Calif. (AP) - Justin Herbert did just enough to keep his streak intact for consecutive games with a touchdown pass. Make it an impressive 28 and counting for Oregon's quarterback, the longest active streak in the nation among FBS schools.

That it turned out to be the Ducks lone score in their 7-6 win over Michigan State in the Redbox Bowl only emphasized why coach Mario Cristobal was smiling after Herbert's decision earlier this month to bypass the NFL draft.

Herbert shook off a sluggish day and threw a 28-yard touchdown pass to Dillon Mitchell in the fourth quarter, and Oregon held on after Michigan State botched a field goal attempt for a 7-6 victory in the Redbox Bowl on Monday.

"We felt like it was going to be that kind of game just watching them on defense," Cristobal said. "We kept battling and battling. You take a victory whether it be one point, two points or 50 points. These guys found a way to get it done."

Herbert passed for 166 yards and extended his streak on a day when the Ducks' offense mostly sputtered.

"We kind of just shot ourselves in the foot the first few drives, and guys kind of settled down and making plays," Herbert said.

Oregon (9-4) crossed midfield only three times and couldn't get into the end zone until Herbert found Mitchell in the right front of the end zone for the deciding score. The Ducks' defense held up from there but got some help from Michigan State's special teams.

The Spartans were lined up for a 50-yard field goal attempt when quarterback Brian Lewerke, who doubles as the holder, bobbled the snap, then attempted to run before hurriedly throwing an incompletion near the sideline.

"It's one that I have to come up with," Lewerke said. "The ball kind of hit my hand on top of the ball. I tried to make something happen. That's what happens."

After Michigan State's defense forced a three-and-out on the following possession, the Spartans took over at their own 42, but Lewerke's long pass on 4th-and-12 was knocked down by Oregon cornerback Thomas Graham.

Lewerke completed 22 of 40 passes for 172 yards with one interception. It's the third time in four games that Michigan State (7-6) has failed to score a touchdown.

Running back LJ Scott ran for 84 yards on 24 carries, ending his injury-riddled season with the Spartans on a high note after being limited to five games. The senior running back declined to redshirt this year and declared for the NFL draft in early December.

Matt Goghlin kicked a pair of 34-yard field goals but he also missed one from 50.

"We never got that bust-out play," Michigan State coach Mark Dantonio said. "You're not going to win many games scoring six points."

It was Oregon's first bowl victory since beating Florida State in the 2015 Rose Bowl.

Michigan State: The Spartans had more than enough on defense but as has been the case all season, the offense simply couldn't hold up its end of the bargain. Lewerke tried to get the passing game going and took several deep shots, but it was his scrambling that was most effective. The memory of the mistake on the field goal try in the fourth quarter will linger, but the Spartans' inability to get a sustained attack on offense was what ultimately did in Dantonio's team.

Oregon: Getting Cristobal a bowl win in his first season was big and should be a nice lift for the Ducks program. That they won when their offense was held to 25 points below its scoring average is also big. The victory is Oregon's third straight, which should build some momentum heading into the offseason.

DON'T GO HOME WITHOUT IT

Cristobal was forced to stop celebrating his team's win over Michigan State in the Redbox Bowl when he noticed that his left hand was bare.

That started a frantic search that ultimately was unsuccessful - almost.

"This is embarrassing," Cristobal said with a smile. "I thought I lost my wedding ring. It was in the locker room the whole time."

Mitchell got off to a slow start before breaking out in the second half and finished with six catches for 70 yards. That was enough to set Oregon single-season record with 1,184 receiving yards. Josh Huff set the previous record of 1,140 yards in 2013.

"It was a goal of mine once it was brought to my attention," Mitchell said. "But I don't really think about it like that. I enjoyed the win more than anything."

Michigan State played most of the second half without defensive end Kenny Willekes, who suffered a broken left fibula in the third quarter. Willekes led the Spartans with 8 ½ sacks this season.

Michigan State: The Spartans will have to find someone to take over for Scott, who went into the day 10th in school history for rushing yards. The good news is that a majority of the starters on both sides are returning, including Lewerke. Michigan State begins 2019 with a home game against Tulsa on Aug. 31.

Oregon: In addition to Herbert, nearly the entire defense is coming back next season as well, so the foundation is set for the Ducks, who open next season at Auburn on Aug. 31.