The win clinched the season series for the Royals, who lead 10-7 with two games remaining.

Hernandez allowed two hits, walked three and hit a batter, one start after allowing seven runs in four innings against the Oakland A's. Four relievers finished, with Scott Barlow pitching the ninth for his 15th save.

Detroit's Casey Mize gave up one run on two hits in three innings. Detroit's best young pitcher is working as an opener to reduce his innings. 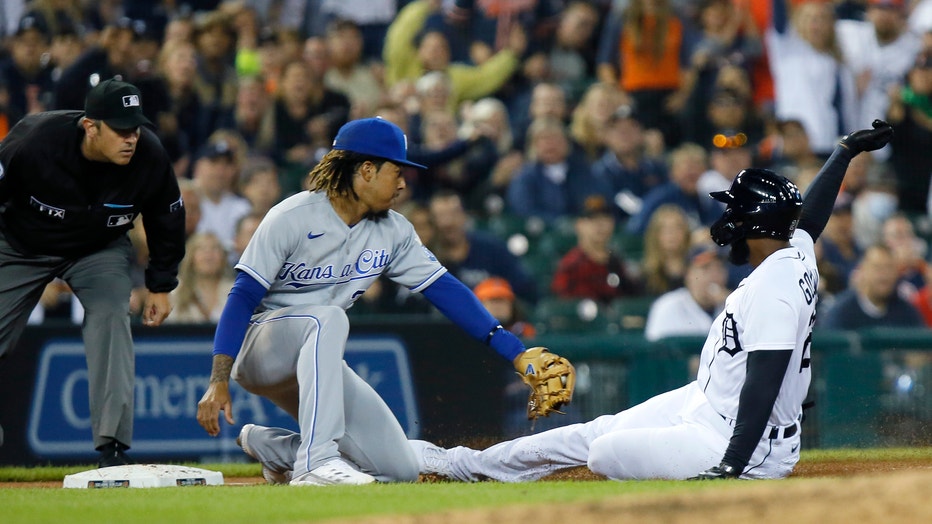 DETROIT, MI - SEPTEMBER 24: Niko Goodrum #28 of the Detroit Tigers slides into the tag from third baseman Adalberto Mondesi #27 of the Kansas City Royals during the seventh inning at Comerica Park on September 24, 2021, in Detroit, Michigan. (Photo b

The Tigers had their best chance against Hernandez in the first, loading the bases with two outs on a hit batter and two walks. Harold Castro lined out to right, ending the threat.

The Royals made it 1-0 in the third inning on a sacrifice fly by Merrifield. The Tigers tied it on Eric Haase's RBI single off Domingo Tapia (4-0) in the sixth.

Kansas City regained the lead in the seventh against Alex Lange (0-3) when Adalberto Mondesi tripled and scored on Ryan O'Hearn's single. Niko Goodrum led off the bottom of the inning with a double, but was thrown out going for third.

Kyle Isbel led off the eighth with another triple and scored on Merrifield's second sacrifice fly of the game.

The start of the game was delayed 11 minutes by a lengthy celebration of Miguel Cabera's 500th home run. Cabrera picked up his 2,980th hit with a single in the sixth inning . He also grounded into a pair of double plays.

The Royals placed OF Michael Taylor on the bereavement list and recalled OF Edward Oliveres from Triple-A Omaha.

Tigers reliever Joe Jimenez pitched a scoreless ninth — his first appearance since going on the COVID-19 list on Sept. 4.