DETROIT - Langston Galloway’s shot from around midcourt rimmed out at the buzzer, and the Charlotte Hornets held on for a 110-107 victory over the Detroit Pistons on Friday night.

Charlotte completed a home-and-home sweep of the Pistons this week. Detroit must be wondering what it has to do to beat the Hornets. Charlotte edged the Pistons 109-106 earlier in the month and 102-101 on Wednesday night.

This matchup went down to the wire again. The Hornets rallied from an eight-point deficit in the final quarter and led by three with 8.9 seconds left. Detroit inbounded the ball, and Luke Kennard missed a 3-pointer from near the top of the key. Galloway was able to run down the loose ball, and his last-ditch shot looked on line, but it wouldn’t go in.

P.J. Washington scored 26 points for Charlotte, and Terry Rozier added 23. The Hornets were without center Cody Zeller because of a left hip injury. 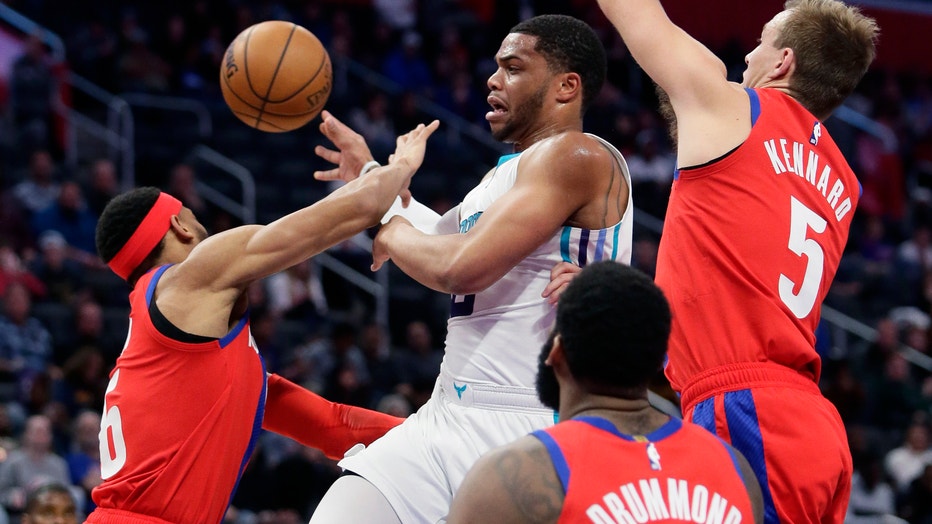 DETROIT, MI - NOVEMBER 29: Miles Bridges #0 of the Charlotte Hornets passes the ball against Bruce Brown #6, Andre Drummond #0 and Luke Kennard #5 of the Detroit Pistons during the first half at Little Caesars Arena on November 29, 2019, in Detroit,

With the score tied at 95, Galloway got a very friendly bounce off the rim when he sank a 3-pointer while being fouled. That four-point play started an 8-0 run, but Charlotte rallied.

Blake Griffin had a chance to tie it with 1:29 remaining, but he made just one of two free throws, and the Pistons didn’t score again. Detroit finished 10 of 20 from the line.

Rozier made his first five 3-point attempts and scored 17 points in the first half. Kennard helped the Pistons mostly keep pace, making four 3s of his own in the first quarter.

The teams combined to make 21 3-pointers in the first half, the most in a first half in any NBA game this season. The Hornets led 62-57.

Hornets: Miles Bridges scored 16 points in front of a crowd that included Tom Izzo, his coach at Michigan State.

Pistons: The Pistons were without G Reggie Jackson (lumbar stress reaction). ... Detroit was called for its second delay of game violation at the start of the second half, so the third quarter began with a technical foul free throw for Charlotte, which Rozier made.

Hornets: At Milwaukee on Saturday night.