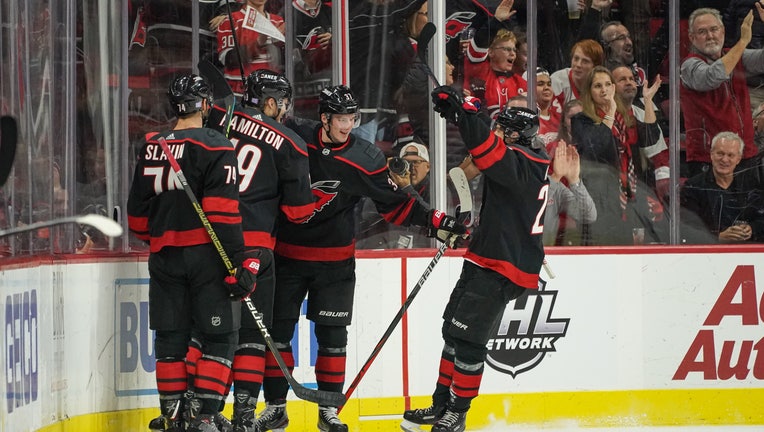 RALEIGH, NC - NOVEMBER 01: Carolina Hurricanes Center Sebastian Aho (20) skates in to celebrate with teammates after scoring during a game between the Detroit Red Wings and the Carolina Hurricanes on November 1, 2019 at the PNC Arena in Raleigh, NC.

RALEIGH, N.C. - The Carolina Hurricanes have been winning without the usual scoring production from Sebastian Aho. He came through Friday night.

The star center had two goals and an assist in the Hurricanes' 7-3 win over the Detroit Red Wings.

Aho, who signed a five-year, $42.27 million deal after leading the team with 83 points last season, entered the game with three goals and six points through the first 12 games.

The Hurricanes have had other players step up in their 9-3-1 start, but they understand Aho's value.

Aho broke a 1-1 tie 37 seconds into the second period with the first of four goals in the period by Carolina, which won its third straight home game.

The group scoring effort is how Carolina has been able to overcome Aho's slow start - including just one goal in the first six games.

"We've been winning, so it helps," Aho said. "I'm not going to lie, it's always nice to score and put some points on the board for myself, too."

Hurricanes coach Rod Brind'Amour has been looking for more from Aho, who led the team with 30 goals last season.

"We're going to be hard on him because we expect so much," Brind'Amour said. "I thought he was better and hopefully we'll see more of that."

Anthony Mantha scored twice and Tyler Bertuzzi also had a goal for the Red Wings, who have lost nine of 10 overall and five straight on the road. Jimmy Howard gave up five goals on 21 shots before being pulled midway through the second period. Jonathan Bernier stopped 11 of the 12 shots he faced.

The teams were tied 1-1 after 20 minutes before Aho's first goal. Detroit coach Jeff Blashill challenged for goalie interference but the call stood after a review and the Red Wings were given a delay of game penalty. On the subsequent power play, Neiderreiter beat Howard to make it 3-1 at 1:48.

"When you go to make those decisions you've got to feel like the call on the ice was dead wrong, in the sense that there was goalie interference," Blashill said. "That's what we felt, so we made the decision. It's obviously a hard rule for the consequence of the penalty."

Aho made it 5-2 with his fifth with 8:57 left, and Bertuzzi pulled the Red Wings back within two a little more than five minutes later.

McGinn's short-handed goal made 6-3 early in the third period and Teravainen added an empty-net goal late to give the Hurricanes a season-best seven goals. Brind'Amour wasn't thrilled with the number of scoring chances Detroit had.

"It was an entertaining game for the fans," Brind'Amour said. "It was great for the game but no so much for the coaching aspect of it."

NOTES: The Hurricanes improved to 6-1 at home. ... Blashill's failed challenge cost Detroit one goal but he also saved one. Carolina's Warren Foegele scored at 6:03 of the second period but video review showed he was offsides and the goal was overturned. ... Howard was pulled after Aho's second goal in the second period. ... It was the 13th straight game for Carolina with at least two goals. ... Hamilton's six-game points streak is the longest of his career.

Red Wings: At Florida on Saturday.