TORONTO - Michael Hutchinson made 29 saves in his first win of the season and the Toronto Maple Leafs beat the Detroit Red Wings 4-1 on Saturday night for their fourth straight victory overall and first with a No. 2 goaltender.

Zach Hyman and Auston Matthews each had two goals and an assist for the Maple Leafs (19-14-4).

Jonathan Bernier started in net for Detroit. He stopped the three shots he faced before leaving the game less than seven minutes in due to a lower-body injury. Calvin Pickard came on in relief and made 16 saves in the loss.

Toronto, which was playing the second game of a back-to-back following a 6-3 win Friday in New York against the Rangers, started slow and was sloppy through the opening 10 minutes. 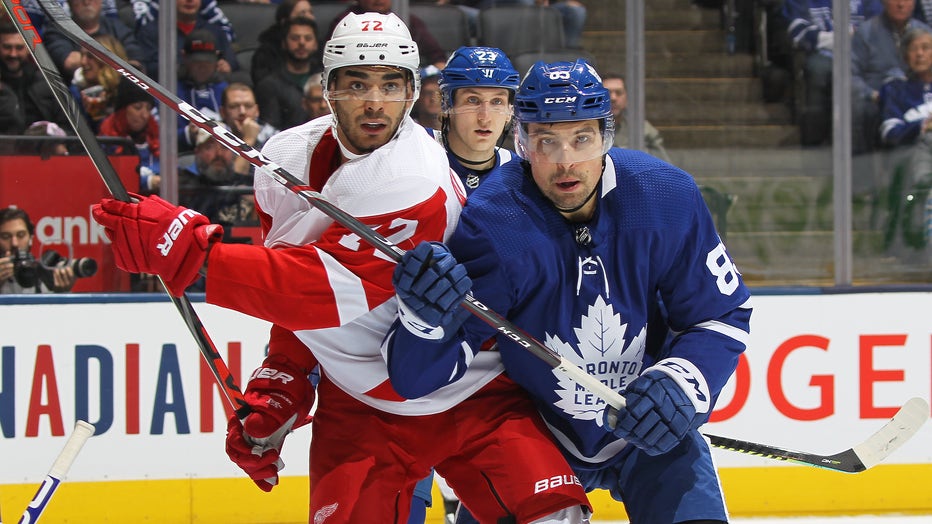 TORONTO, ON - DECEMBER 21: Andreas Athanasiou #72 of the Detroit Red Wings battles against Cody Ceci #83 of the Toronto Maple Leafs during an NHL game at Scotiabank Arena on December 21, 2019 in Toronto, Ontario, Canada. The Maple Leafs defeated the

Hutchinson stopped two breakaway chances by Dylan Larkin early on, and played well in the second.

First, he stopped Andreas Athanasiou on a breakaway as his teammates appeared to be a tired group for much of the first 40 minutes. He then made a blocker save on Larkin, who was streaking down the wing.

Toronto trailed 21-14 in shots when it caught a break for the game's first goal with 2:50 to go in the second.

Hyman was pulled down by Mike Green on a breakaway, leading to a tripping penalty. But video review showed the loose puck bounced off the trailing Red Wings defender and crossed the goal line before the Leaf forward crashed into the net, negating the penalty and giving the Leafs a 1-0 lead.

Toronto appeared to find its energy for the third period, with Mitch Marner moving onto the wing with Hyman and Matthews.

Matthews doubled the lead 2:18 into the third with a shot that beat Pickard between the pads. Hyman added his second of the game at 8:51 with a backhand over Pickard's glove.

The Leafs scored again when Matthews finished off a pass in front from Marner at 13:39.

Detroit forward Anthony Mantha had to be helped off the ice in the final minutes after being thrown to the ground by Toronto defenseman Jake Muzzin near the sideboards in the Leafs' end.

Muzzin was given a 10-minute penalty for unsportsmanlike conduct along with a two-minute minor for roughing. The Red Wings took advantage of the man advantage, spoiling Hutchinson's shutout bid when Bertuzzi scored with 1:44 remaining in the game.