After Dexter Williams threw a 24-yard pass to AJ Barner to start the second overtime, Shivers ran for the game-winner. Williams threw a two-point conversion pass to Barner to give the Hoosiers an eight-point cushion. Michigan State failed to score as it could only drive to the 13-yard line. 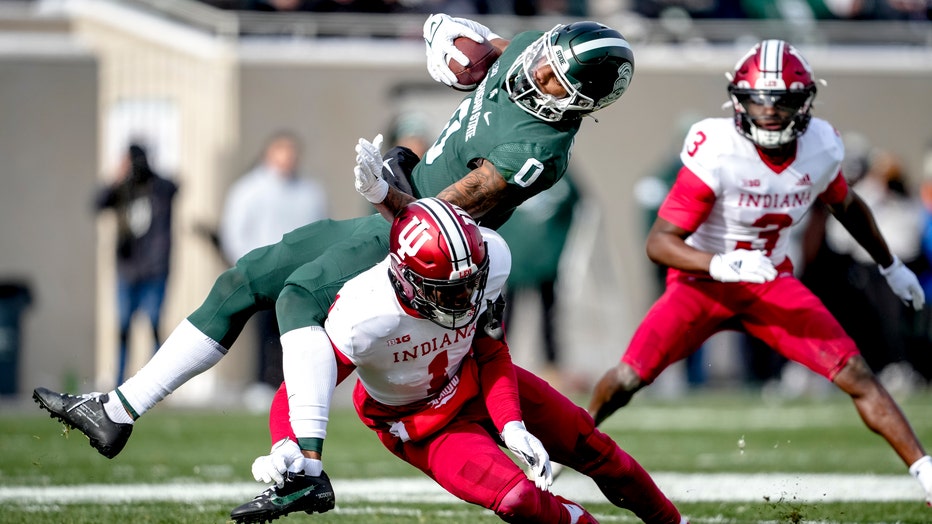 EAST LANSING, MICHIGAN - NOVEMBER 19: Devon Matthews #1 of the Indiana Hoosiers tackles Keon Coleman #0 of the Michigan State Spartans during the first quarter of the game at Spartan Stadium on November 19, 2022 in East Lansing, Michigan. (Photo by N

Michigan State (5-6, 3-5) appeared to be running away with the game after building a 17-point halftime advantage, but the Hoosiers rallied in the second half.

The Hoosiers (4-7, 2-6) closed within 24-14 at the start of the second half when Shivers broke free for a 79-yard touchdown run. The Spartans responded with Elijah Collins scoring his second touchdown of the game on a 31-yard burst through the line.

Indiana's Jaylin Lucas, who had 168 kickoff return yards, returned the ensuing kickoff 88 yards for a touchdown. Following an interception of a pass by Payton Thorne, the Hoosiers' Campbell made a 40-yard field goal to cut it to 31-24.

Josh Henderson tied the game at 31 with 12:59 left on a 1-yard run. Michigan State had a chance to win the game in regulation but Patton missed a 22-yard field goal as time expired.

Indiana: The win snapped a seven-losing streak for the Hoosiers. Indiana is now 2-15 in league play over the past two seasons.

Michigan State: The Spartans blew a chance to become bowl eligible and will now need to win next week at Penn State. The loss broke a two-game winning streak for Michigan State.

Indiana: Hosts Purdue on Nov. 26 in the regular season finale.