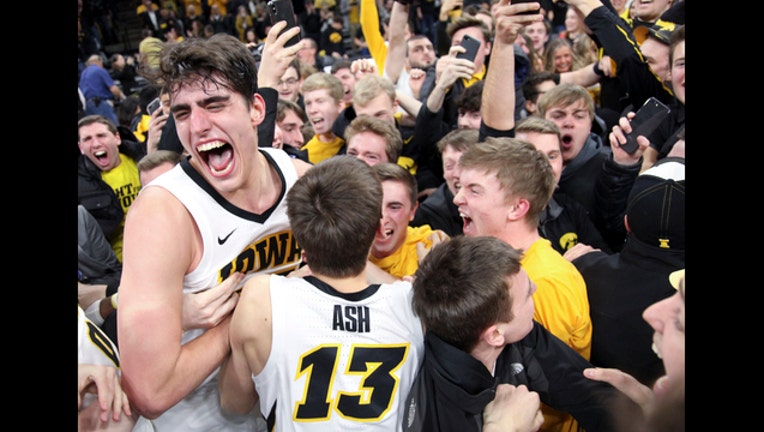 IOWA CITY, IOWA- FEBRUARY 01: Forward Luka Garza #55 and guard Austin Ash #13 of the Iowa Hawkeyes celebrates with fans after the upset over the Michigan Wolverines on February 1, 2019. (Photo by Matthew Holst/Getty Images)

Ryan Kriener had 15 points and 10 rebounds for the Hawkeyes (17-5, 6-5 Big Ten), who snapped a two-game losing streak with their biggest win of the season.

Iowa blistered Michigan's top-notch defense and put the Wolverines in their biggest hole of the season, 14 points, late in the first half. The Hawkeyes used a 21-2 run to grab a 42-29 lead at the break - nearly matching the 49 points Ohio State put up against Michigan in a 16-point loss on Tuesday.

"I can see why they're 17-5 right now," Michigan coach John Beilein said about Iowa. "We got beat by a really good team."

Ignas Brazdeikis and Jordan Poole each scored 16 points for Michigan, which allowed 70 or more points for just the second time this season. Big Blue shot just 32.3 percent and 8 of 33 on 3s and got outscored 40-20 in the paint.

Michigan: The Wolverines fell a half-game behind Michigan State in the Big Ten race. The difference? Michigan State won in Iowa City, crushing the Hawks 82-67, and Michigan didn't. But the Wolverines and Spartans have two meetings coming up, including the regular-season finale in East Lansing on March 9. That might still be the game that decides the league title.

Iowa: This was the Hawkeyes' best performance of the season, by far - and the signature win they've been looking to add to their postseason resume. Iowa also beat Iowa State, now ranked 20th, but the Cyclones didn't have star guard Lindell Wigginton for that one.

Michigan will take a tumble, but it likely won't fall too far considering it only has two losses - both on the road in league play. The Wolverines lost at Wisconsin 64-54 on Jan. 19. As for Iowa, this might've been enough to get the Hawkeyes back into Monday's poll.

Michigan: Faces Rutgers on the road on Tuesday.

Iowa: Plays at Indiana on Thursday.