Isbel, a 25-year-old outfielder, hit his grand slam over the wall in right field off Jason Foley in the fifth to give the Royals a 9-1 lead. The slam was Isbel's fourth of the season and fifth of his two-year major league career. 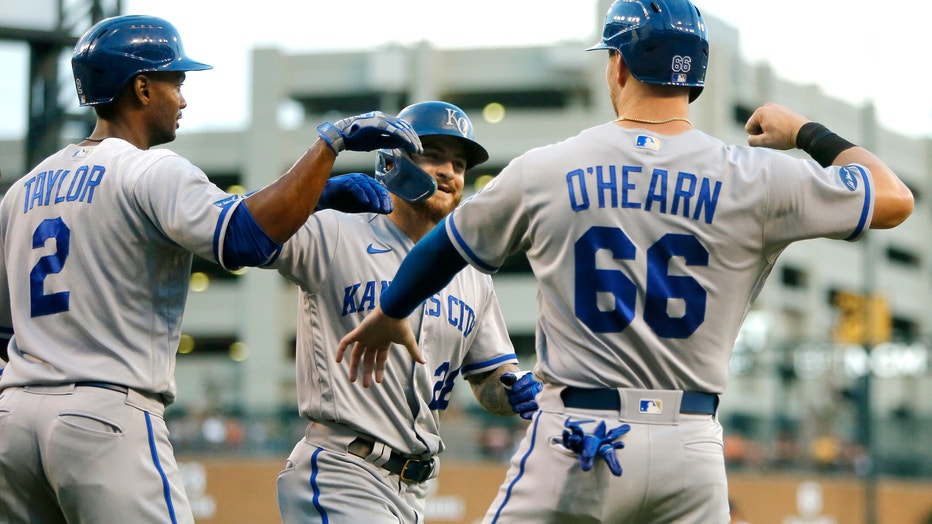 DETROIT, MI - SEPTEMBER 3: Kyle Isbel #28 of the Kansas City Royals celebrates with teammates Michael A. Taylor #2 and Ryan OHearn #66 after hitting a grand slam against the Detroit Tigers during the fifth inning at Comerica Park on September 3, 2022

Pratto gave Kansas City a 1-0 lead with his two-out homer in the first. The Tigers tied it in the second on Ryan Kreidler's sacrifice fly, his first career RBI. Kreidler later added his first two major-league hits in his second career game.

Witt's homer gave the Royals a 4-1 lead in the third. Melendez added an RBI single in the fifth to give Kansas City a four-run advantage.

Royals: 1B Vinnie Pasquantino (right shoulder discomfort) began a rehab assignment on Saturday with Triple-A Omaha. Pasquantino has been out of action since Aug. 22. ... C Salvador Perez (right hand contusion) was not in the lineup. He was hit by a pitch on Friday.

Tigers: DH Miguel Cabrera (biceps soreness) did not play. Cabrera was removed for a pinch-hitter on Friday. ... 2B Jonathan Schoop (right ankle sprain) began a rehab assignment with Single A West Michigan on Saturday. Schoop was injured on Aug. 20.

Royals: RHP Max Castillo (0-1, 2.81 ERA) will make his second start of the season for Kansas City on Sunday. Castillo, who has made 12 minor league starts this season, held Tampa Bay to one run in five innings in his Royals debut on Aug. 18.

Tigers: RHP Matt Manning (1-2, 3.79 ERA) will try to bounce back from his worst outing this season. Manning surrendered seven runs in 2 1/3 innings to Seattle on Tuesday. He pitched six scoreless innings against San Francisco in his previous start.