BLOOMINGTON, Inf. - BLOOMINGTON, Inf. (AP) — Trayce Jackson-Davis finished with 31 points and 15 rebounds for his 40th career double-double and Indiana pulled away in the second half to beat Michigan State 82-69 on Sunday.

Jackson-Davis finished with five blocked shots to tie Jeff Newton's school-record career total of 227. He has 959 rebounds in his career — fourth all-time. Kent Benson is third with 1,031. Jackson has eight double-doubles this season. He is currently sixth on the Hoosiers' all-time list — one behind Benson and two behind Steve Downing. 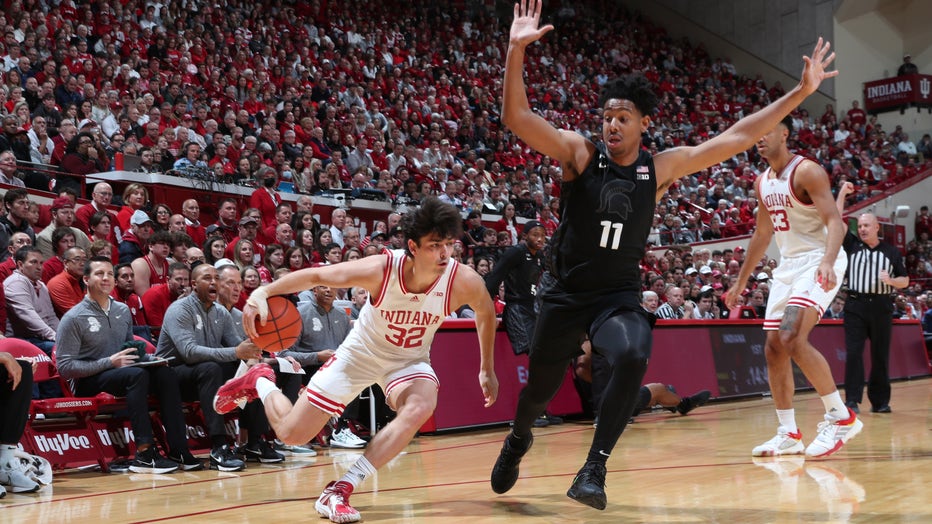 Michigan State battled back in the second half and grabbed a 44-42 lead on a fast-break dunk by Jaden Akins with 15:52 remaining. Trey Galloway hit a 3-pointer and two free throws as Indiana retook the lead. Akins buried a 3-pointer to give the Spartans a 51-49 lead with 13:34 left, but Tamar Bates drilled a 3-pointer 29 seconds later and the Hoosiers never trailed again. Akins' 3-pointer with 6:04 to go upped Indiana's lead to 67-57 and the Hoosiers led by double digits from there.

Galloway sank all three of his shots from beyond the arc and scored 17 as Indiana earned its third straight victory. Bates, who didn't score in wins over No. 18 Wisconsin and Illinois in the previous two games, buried 5 of 6 shots from distance and scored 17. Jackson-Davis had a team-high four assists.

Indiana: The Hoosiers travel to play Minnesota on Wednesday. They return home to play Ohio State on Saturday.

Michigan State: The Spartans host Iowa on Thursday. They travel to play No. 3 Purdue on Sunday.