Marcus Smart added 20 points, and Robert Williams III had 12 points and nine rebounds for the Celtics. They have won 18 of 21 since a Jan. 21 loss dropped them a game below .500.

Cade Cunningham had 27 points and eight rebounds for the Central Division-trailing Pistons, who had won three in a row before falling Wednesday night to Chicago. Marvin Bagley III had 20 points and 11 rebounds, and Jerami Grant also scored 20 points. 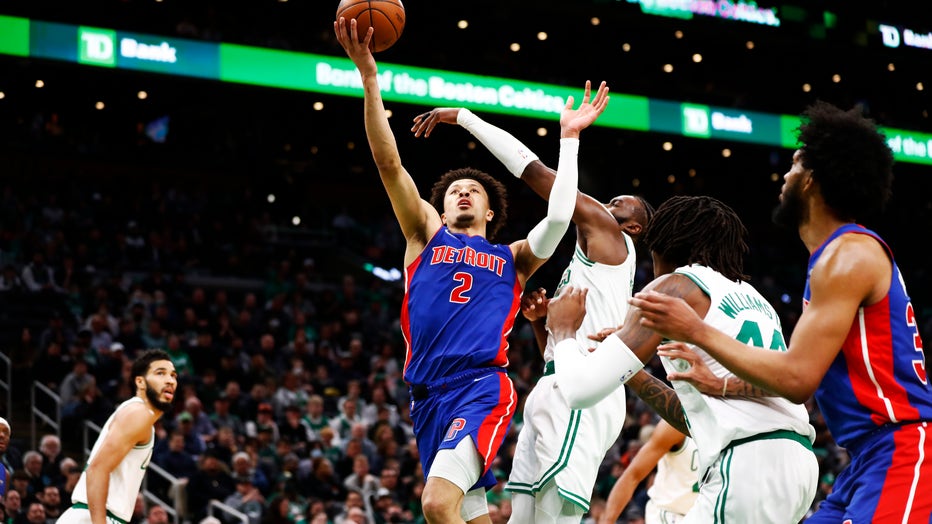 BOSTON, MASSACHUSETTS - MARCH 11: Cade Cunningham #2 of the Detroit Pistons drives to the basket against Jaylen Brown #7 of the Boston Celtics during the first quarter of the game at TD Garden on March 11, 2022 in Boston, Massachusetts. NOTE TO USER:

The Celtics never led by more than four points before scoring the last four points of the third quarter and the first seven of the fourth to turn a two-point deficit into a 99-90 lead.

The Celtics honored some former players who were in town for the retirement of Kevin Garnett’s No. 5 on Sunday. Among them were members of the 2008 NBA championship team, including Paul Pierce, James Posey, Leon Powe and Brian Scalabrine.

Garnett will be the 24th Celtic to be honored in the TD Garden rafters, including No. 1 for original owner Walter Brown, No. 2 for franchise patriarch Red Auerbach and "LOSCY" for Jim Loscutoff, who left his No. 18 in circulation so Dave Cowens could wear it.

Tatum topped 30 points for his fifth straight game, tying the longest such streak of his career. ... The Pistons made their first 19 free throws and finished 23 of 24.