Carlos Correa and Gio Urshela added RBIs for the Twins, whose lead in the American League Central starting the day was one game over Cleveland.

Entering to a nice ovation, López, an All-Star acquired Tuesday from Baltimore, earned his 20th save of the season with a 1-2-3 ninth inning.

He needed just six pitches, including a three-pitch strikeout of Eric Haase. 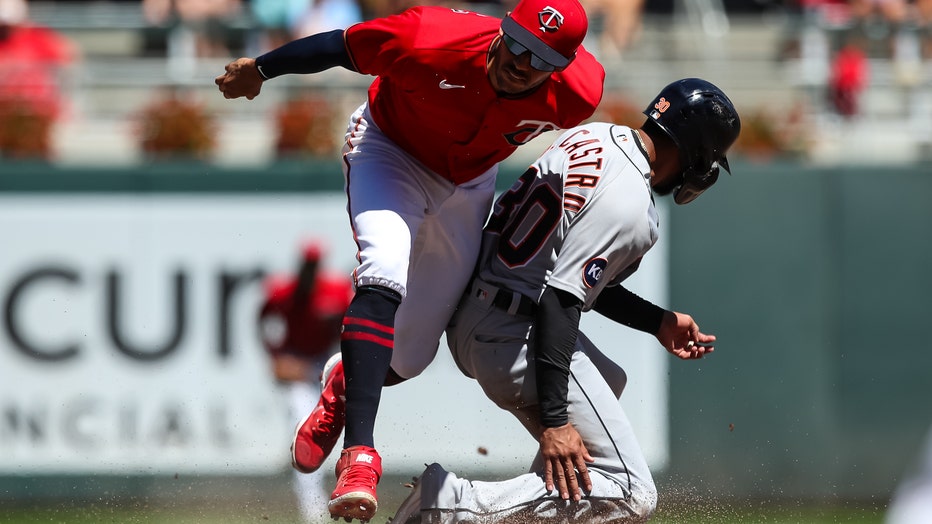 MINNEAPOLIS, MN - AUGUST 03: Harold Castro #30 of the Detroit Tigers is thrown out at second base against Carlos Correa #4 of the Minnesota Twins on a pickoff attempt in the sixth inning of the game at Target Field on August 3, 2022 in Minneapolis, M

López’s outing came after Minnesota starter Joe Ryan bounced back from a career-worst outing with five mostly solid innings. Michael Fulmer then pitched a scoreless inning in his Twins debut against the team from which he was traded Tuesday, before Caleb Thielbar and Jhoan Duran each tossed a scoreless frame.

But he hit two batters in the fifth before Riley Greene’s RBI single.

Acquired Tuesday from Cleveland, León had two hits, including a two-run double in the second for Minnesota. He had two hits in 15 at-bats for the Guardians this season, spending much of the year in the minors.

A Correa line drive in the sixth nearly hit Byron Buxton near second base but got through as the speedy Buxton raced home.

Detroit struck out 14 times Wednesday, 41 times in the three-game series, and has whiffed 148 times in 17 games against Minnesota this season.

Making his second straight start after two months in the bullpen, Tyler Alexander (2-5) was the hard-luck loser, allowing two hits and striking out five in five innings. He retired the Twins in order in four of those frames.

Detroit has played 53-day games, the most in baseball, and 52 night games. This was Minnesota’s 48th day game, tied with the White Sox for fourth most in the majors. Cleveland has played 51 and Oakland 50.

Both teams made a quartet of moves before the game.

For Minnesota, Thielbar (left hamstring strain) was reinstated from the 15-day IL. The contract of León was selected from Triple-A St. Paul. RHP Joe Smith was designated for assignment and C Caleb Hamilton was optioned to St. Paul.

Tigers: In a 0-for 19 skid, DH Miguel Cabrera did not play. Manager A.J. Hinch said Cabrera’s right knee is bothersome, and he plans to give the 39-year-old a few more scheduled days off the rest of the season.

Twins: Buxton went 1 for 3 as the team’s DH after sitting the past two days with a sore right knee that was thoroughly evaluated Tuesday by trainers.