Joseph's three goals were his first for Ottawa since being dealt from Tampa Bay at the trade deadline.

"Obviously, it feels good," he said. "It’s not every day you can do that in the NHL."

Josh Norris, playing in his home state for the first time in his pro career, scored on a power play for his 27th goal for the Senators. Austin Watson added a short-handed goal.

The 6-foot-7 Sogaard, a 2019 second-round draft choice, was promoted from Belleville of the American Hockey League on Sunday. He became the second goaltender of Danish descent to appear in an NHL game, joining Frederik Andersen.

"This is something I’ve worked for my entire life and something I’ll never forget," Sogaard said. 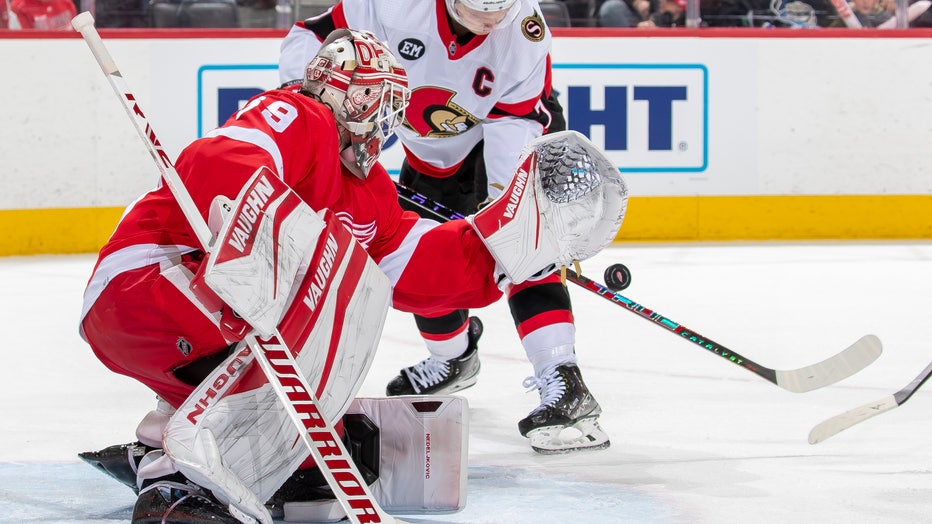 DETROIT, MI - APRIL 01: Brady Tkachuk (7) of the Ottawa Senators attempt to handle the puck to the side of Alex Nedeljkovic (39) of the Detroit Red Wings during the second period of an NHL game at Little Caesars Arena on April 1, 2022 in Detroit, Mic

Sogaard knew he'd make his debut this week — and showed no nerves in his debut.

"He just looked so calm for a young guy," coach D.J. Smith said. "He’s so big, some (pucks) just hit ’em. As he gets older and really learns the position, you’ve got to be excited for what he’s going to bring to this organization."

Rookie Lucas Raymond scored both goals for the Red Wings, who are winless in their last five games. Alex Nedeljkovic made 27 saves.

Ottawa scored the only goal in the first period. With the Senators’ Alex Formenton in the penalty box, Joseph fed the puck to Watson, who fired it past Nedeljkovic from the slot.

Watson’s short-handed goal was his first since the 2017-18 season, when he had four for Nashville.

The Red Wings only had six shots on goal in the period.

"When you are facing a goalie playing his first game, you want to get a lot of shots on him early and make it as hard as possible on him," Detroit forward Sam Gagner said. "I think we made it too easy on him."

Raymond tied it 2:18 into the second period with his 21st goal. Jake Walman's shot bounced off Sogaard’s glove and Raymond backhanded the puck into the net.

After killing off a 5-on-3 situation earlier in the third, the Senators scored at 2:24 on Norris' one-timer from the right circle. Just over a minute later, Joseph scored in front to make it 3-1.

Joseph notched his second goal of the night and 10th of the season on a shot from the right circle with 6:41 remaining. Raymond answered with his 22nd goal 40 seconds later.

Joseph fired in an empty-netter from his own zone with 3:55 left to complete the hat trick.

"I missed probably six or seven shots at the empty net from my blue line this morning, so I wasn’t really confident about that shot," Joseph said.

"We have to dig a little deeper for these last few weeks and find a way to enjoy the challenge in front of us," he said. "We’ve got to play with more energy and we have to start killing more penalties."

NOTES: Walman's second-period assist was his first point in six games with the Red Wings since he was acquired from St. Louis. ... Ottawa visits Detroit again on April 12. ... The Senators were playing their second game since longtime owner Eugene Melnyk died of an illness Monday.