Ryan Dzingel scored his second goal in as many games for Arizona, and Scott Wedgewood had 33 saves — two days after tying a career high with 42 saves in a 5-4 shootout loss to Columbus.

Keller's winning goal came when he picked up a loose puck on the right side of the net after if bounced through a crowd and fired it into an open net.

Dylan Larkin scored his ninth goal of the season for the Detroit Red Wings, who went winless on a four-game trip. Larkin has five goals in his last five games and six in his last seven. Lucas Raymond, who assisted on Larkin’s goal, is among the league leaders among rookies with 12 assists.

Alex Nedeljkovic, who finished with 27 saves, was seldom tested in net in the first two periods, but Dzingel tied it at 1 with a tip-in with less than seven minutes left in the third period. Dzingel redirected a shot from the left circle from Cam Dineen that skimmed the top of the crossbar and went over Nedeljkovic’s right shoulder. 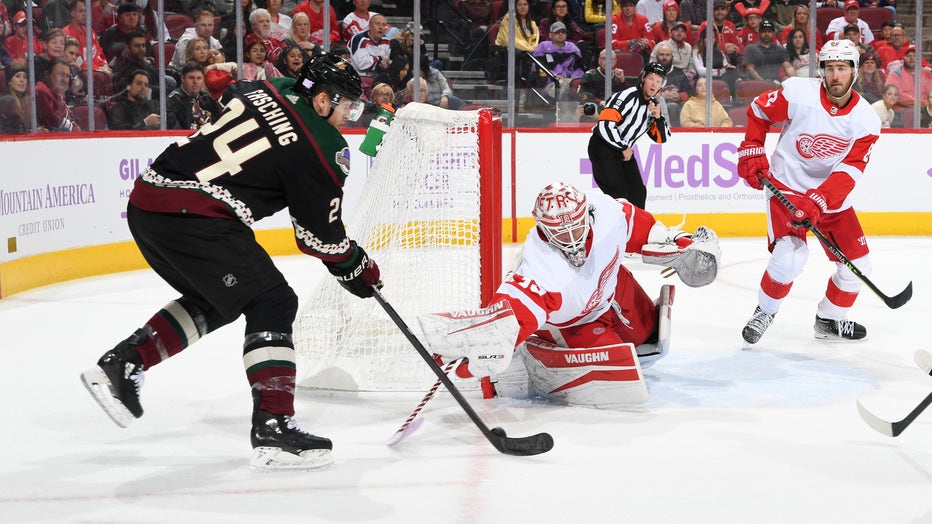 GLENDALE, ARIZONA - NOVEMBER 20: Goaltender Alex Nedeljkovic #39 of the Detroit Red Wings attempts to make the save on a shot by Husdon Fasching #24 of the Arizona Coyotes during the second period at Gila River Arena on November 20, 2021 in Glendale,

Dzingel has a goal in each of the last two games after missing the previous 10 with an upper body injury.

After making a left pad save to rob Larkin on Detroit power play 14 minutes into the second period, Wedgewood fell to the ice after being struck in the chest by a slap shot from Robby Fabbri. He was prone on the ice for several minutes and received medical attention before sitting up, but stayed in the game.

Dineen had his first career point. … Raymond was tied for the league lead among rookies with 11 assists, as well as the rookie lead with seven goals. … Detroit defenseman Marc Staal missed his second straight game. … The Red Wings are three wins from 3,000 in franchise history.

Coyotes: Visit Los Angeles in the second of a back-to-back Sunday.