TAMPA, Fla. - TAMPA, Fla. (AP) — Alex Killorn had a goal and an assist, and the Tampa Bay Lightning beat the Detroit Red Wings 5-1 on Wednesday for their third consecutive win. 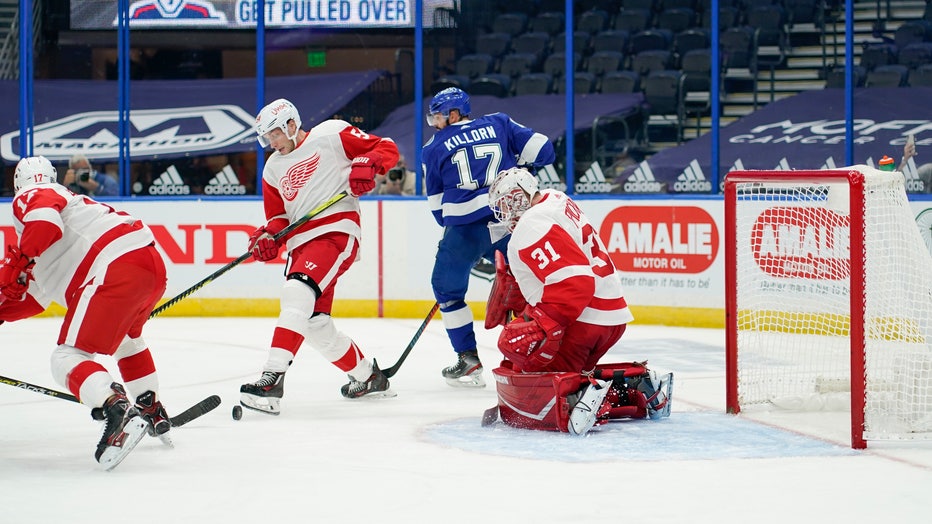 "It’s game eight so you can continuously get better but I like the way we played on both ends of the ice,’’ Killorn said.

The Lightning stretched their home win streak against the Red Wings to 15 dating to Dec. 12, 2013.

"It’s nice to have a hot start like that, putting three in the first five (minutes),’’ Cirelli said.

Hedman got Tampa Bay on the board just 1:34 into the game. The 6-foot-6 defenseman took a Tyler Johnson pass off the wall, skated in and cut to the slot before sending a wrist shot over the right shoulder of Greiss.

Cirelli made it 2-0 at 3:57, converting a rebound from the right circle with a quick snap shot while skating 4-on-4. McDonagh scored his first of the season at 4:54, making it 3-0 before Detroit registered a shot on goal.

"You get down 3-0, the game’s not over by any stretch, but you dig yourself a huge hole," Detroit coach Jeff Blashill said. "I thought we played fine for a stretch after that, but against this team you can’t give yourself a 3-0 hole.’’

Point scored his fourth of the season 7:25 into the second period, quickly lifting a rebound from in close off a Steven Stamkos shot.

Mantha scored on a breakaway at 9:49 before Killorn deflected a Mikhail Sergachev shot to make it 5-1 at 11:32.

"We just continue to grow as a team,’’ Lightning coach Jon Cooper said. "I thought after the second period we didn’t really give them too much.’’

Detroit captain Dylan Larkin appeared in his 400th game, all with the Red Wings.

BACK IN THE LINEUP

The teams play again on Friday.