NEW YORK - Jalen Brunson scored 17 points in his first home game at Madison Square Garden, Immanuel Quickley bounced back from a rough opener with 20 points and the New York Knicks beat the Detroit Pistons 130-106 on Friday night for their first victory of the season.

RJ Barrett, who also struggled with his shot in an overtime loss in Memphis in the season opener, rebounded with 18 points. Obi Toppin scored 16, Julius Randle had 15 and there was no chance of another tense finish in this one after the Knicks seized control late in the first quarter. 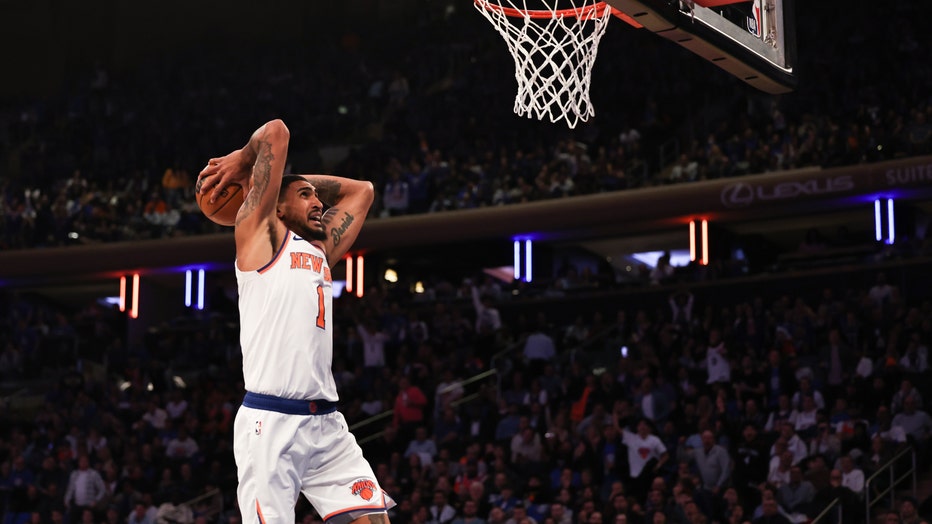 NEW YORK, NEW YORK - OCTOBER 21: Obi Toppin #1 of the New York Knicks dunks the ball during the fourth quarter of the game against the Detroit Pistons at Madison Square Garden on October 21, 2022 in New York City. NOTE TO USER: User expressly acknowl

Saddiq Bey scored 26 points for the Pistons, who beat Orlando in their opener. Detroit fell behind by 15 in the first quarter before working its way back in that victory, but there was no comeback from the type of deficit the Pistons faced Friday.

The Knicks began to pull away with their reserves on the floor late in the first quarter, with Derrick Rose’s 3-pointer capping an 11-2 run and making it 30-20 after one. Rose made another 3 for New York’s first basket of the second, this time starting a 12-2 burst that extended it to 42-24.

Detroit was 4 for 15 (27%) from both 3-point range and the free throw line in the first half. Hamidou Diallo missed all five attempts from the line.

The Pistons did cut a 29-point deficit to 91-79 late in the third, but the Knicks answered with an 18-2 run into the fourth quarter, with Toppin slamming down two dunks early in the period, to put it away at 109-81.

Pistons: Rookie C Jalen Duren, whose rights the Pistons acquired from the Knicks in a trade that was agreed to on draft night, had eight points and 10 rebounds. ... Coach Dwane Casey said G Alec Burks, who played the last two seasons for the Knicks, wasn't close to returning from a fractured bone in his left foot.

Pistons: At Indiana on Saturday.