Andrew Chafin (1-2) got the win with 1 1/3 innings of scoreless relief. Gregory Soto struck out the side in the ninth for his 24th save. 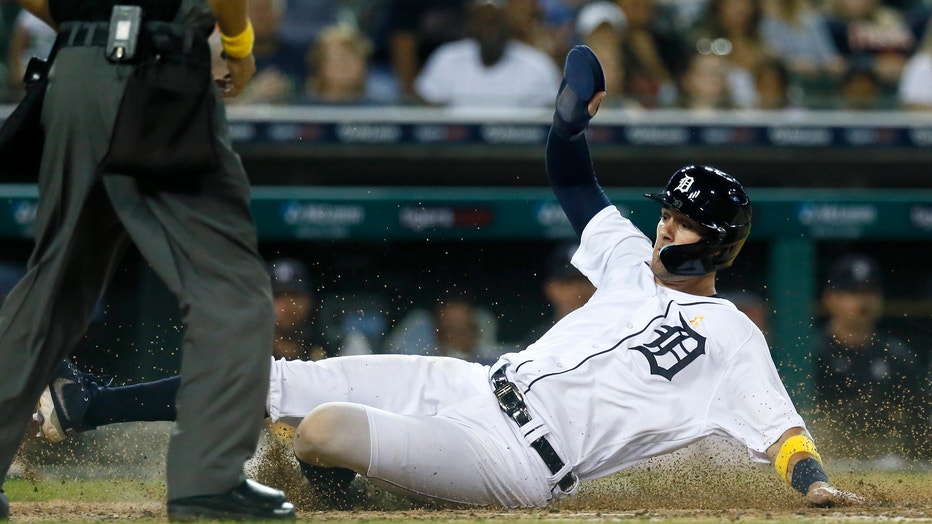 DETROIT, MI - SEPTEMBER 2: Ryan Kreidler #32 of the Detroit Tigers scores from third base on a sacrifice fly hit by Victor Reyes during the fifth inning at Comerica Park on September 2, 2022, in Detroit, Michigan. (Photo by Duane Burleson/Getty Image

Michael A. Taylor hit a two-run homer for the Royals, who have dropped three straight. Carlos Hernandez (0-4) took the loss.

Kansas City scored a pair of two-out runs in the second. Kyle Isbel had an RBI single and Riley Greene's error while trying to retrieve the ball allowed another run to come home.

Detroit scored four runs in the fifth. Castro hit his solo homer with one out. Victor Reyes drove in the second run with a sacrifice fly before Baez launched his 12th homer on a full count.

Taylor's ninth homer in the sixth tied the score at 4.

Harold Castro poked his two-out single to left to drive in Kreidler in the seventh.

Royals: RHP Daniel Mengden was designated for assignment and RHP Wyatt Mills was recalled from Triple-A Omaha. Mengden started for Kansas City on Thursday and gave up three runs in 2 2/3 innings against the Chicago White Sox. Mills is 0-1 with a 5.30 ERA in 18 relief appearances with Kansas City this season.

Royals: 1B Vinnie Pasquantino (right shoulder discomfort) took batting practice in Detroit on Friday. Pasquantino, who has been out since Aug. 22, is eligible to come off the injured list. ... C Salvador Perez was taken out in the sixth after getting hit by a pitch.

Tigers: 2B Jonathan Schoop (right ankle sprain) is expected to begin a rehab assignment with Triple-A Toledo this weekend. Schoop, sidelined since Aug. 20, is batting .202 with nine homers and 34 RBIs. ... C Eric Haase departed after the first inning with a lower abdominal contusion. He was struck by a foul ball off Salvador Perez's bat.

Royals: RHP Jonathan Heasley (2-7, 5.22 ERA) will start the middle game of the series Saturday. He gave up four runs (three earned) in five innings against San Diego on Sunday while earning his second victory this season.

Tigers: RHP Michael Pineda (2-6, 5.27 ERA) will make his first start since July 23 on Saturday. He was activated from the injured list this week after recovering from a triceps injury.