Mika Zibanejad had a goal and an assist and Frank Vatrano also scored for New York. Barclay Goodrow had two assists. Igor Shesterkin made 20 saves for his fifth shutout of the season.

Thomas Greiss had 33 saves for the Red Wings, who were shut out for the seventh time this season.

Zibanejad opened the scoring for the Rangers 13:44 into the first period on a 5-on-3 advantage. Greiss and Sam Gagner had each earned a delay of game penalty for the Red Wings just 31 seconds apart for sending the puck over the glass. Zibanejad’s goal gave the 28-year-old a career-high 76 points, topping his total from 2019-20. 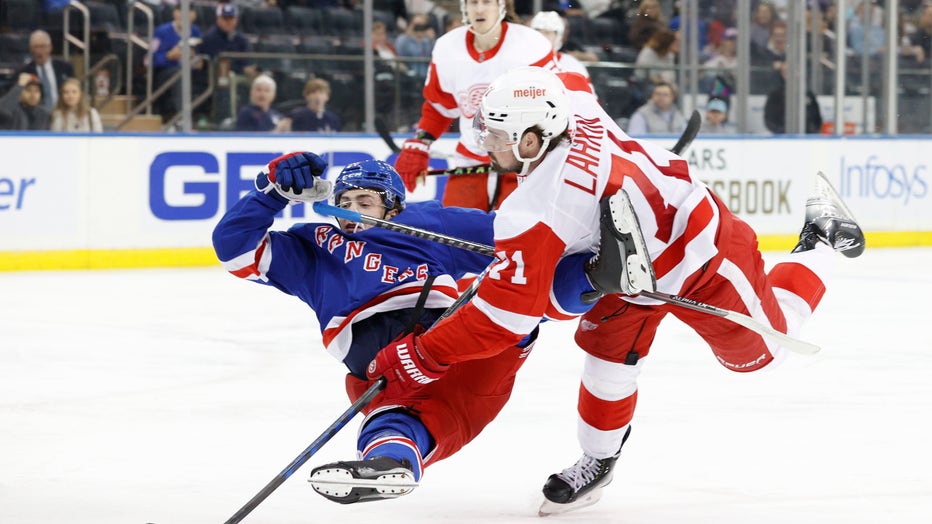 "We came out strong," Zibanejad said. "We did that from the start. Most of the game was really good. We did a lot of good things."

New York enjoyed the majority of quality chances in the first period, outshooting Detroit 17-3. With Danny DeKeyser in the penalty box for high-sticking in the final seconds of the period, Ryan Strome nearly doubled the Rangers’ lead, but was denied by Greiss from point-blank range.

Vatrano scored to give New York a 2-0 lead 3:46 into the second period, firing a wrist shot from the slot past Greiss for his 100th career goal.

"We were outstanding," Rangers coach Gerard Gallant said. "We just went out there and played our game."

Two of the Red Wings’ best chances in the second period came while short-handed. With Moritz Seider in the box for holding, Gagner and Filip Hronek each forced Shesterkin to make quality saves.

With 1:02 remaining in the second period, Detroit earned its first power play of the game after a tripping call assessed to Filip Chytil. The Rangers enjoyed the best chance before the break however, as K’Andre Miller forced a save by Greiss on a short-handed breakaway.

Lafreniere gave New York a 3-0 advantage 4:37 into the third period, beating Greiss on his near side despite the goalie managing to deflect the shot. The goal snapped an eight-game point drought for Lafreniere.

"I felt pretty good," Lafreniere said. "That’s what I have to do more often and improve every night."

Lafreniere added his second goal with 5:43 remaining in the game, giving him the first multi-goal game of his career. The 20-year-old slipped the puck between his legs to dodge Larkin before beating Greiss with a backhand shot for a highlight-reel goal.

"I just have to play my game," Lafreniere added. "That’s what I want to do. Feel the puck and make plays."

Kaapo Kakko left the game in the second period with a lower-body injury and did not return. Gallant said after the game that he didn’t believe the injury was "too serious."

With an assist on Zibanejad’s opening goal, Artemi Panarin reached 90 points this season for the second time in his career, following a 95-point output with the Rangers in 2019-20. Before Panarin joined New York, the previous Ranger to hit the 90-point mark was Jaromir Jagr in 2005-06 and 2006-07.

Lafreniere and Patrik Nemeth returned to the Rangers’ lineup Saturday, taking the places of Ryan Reaves and Justin Braun, respectively. Nemeth had been a healthy scratch the previous three games; Lafreniere the previous one.

Red Wings rookie forward Chase Pearson played his second career game after being called up from the AHL under emergency conditions Saturday morning, taking the place of Oskar Sundqvist. The 24-year-old was a fifth-round draft pick in 2015.

Newly acquired Red Wings goalie Magnus Hellberg practiced with Detroit for the first time on Friday in New York. The 31-year-old signed a one-year contract with the Red Wings on Thursday after spending the past five seasons playing in Russia’s Kontinental Hockey League.