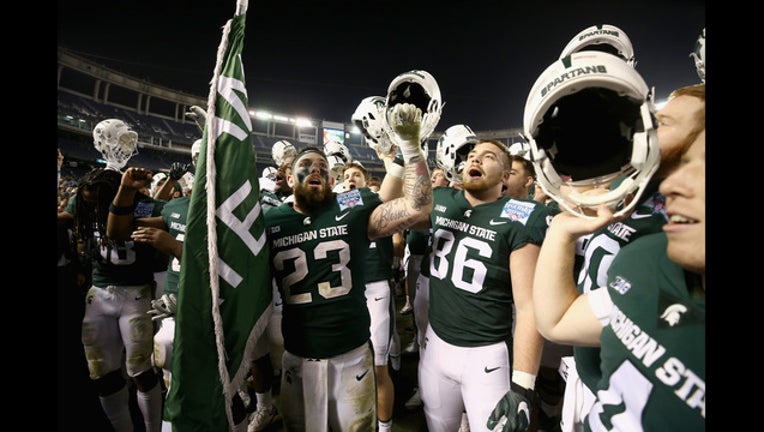 Brian Lewerke threw for 213 yards and three touchdowns, and LJ Scott ran for 110 yards and two scores for No. 18 Michigan State, which took advantage of Luke Falk's absence to rout No. 21 Washington State 42-17 in the Holiday Bowl on Thursday night.

Lewerke also rushed for 73 yards for Michigan State (10-3), which rebounded from a dismal 3-9 record last year to reach double digits in wins for the eighth time in program history.

"We were ready to play. We were fresh," said Mark Dantonio, who earned his 100th victory in 11 seasons as Spartans coach. "It wasn't good enough to win nine games. We needed to win 10. We needed to have a great bowl game. This was a national stage. Holiday Bowl is an outstanding bowl. It's catapulted us up the rankings at least a little bit further.

Falk, who was photographed earlier in the week with a cast on his left wrist, went through warmups but came out in street clothes at game time. He was replaced by redshirt sophomore Tyler Hilinksi, who made his first start and eighth appearance of the season. It's unclear precisely when Falk injured the wrist on his non-throwing hand, but he had issues with it throughout the season.

Coach Mike Leach refused to give specifics during the week and was condescending afterward when asked about Falk's injury.

"Luke is doing exactly what we want Luke to do and Luke has had a fine career here and also done a great deal for this program, probably more than most people will ever realize," Leach said. "Tyler was the ideal guy to start with our lineup today."

Pressed on Falk's injury, Leach said: "You will remain unclear on it. Next question."

Hilinski led WSU (9-4) to a 45-yard field goal by Erik Powell on the Cougars' second drive, but the Cougars were overpowered by the Spartans.

Lewerke threw the first of two TD passes to Cody White, a 7-yarder midway through the second quarter, when he was flushed to the left but found the receiver in the back of the end zone.

On MSU's next possession, Lewerke took the snap and glanced at his running back, which froze the secondary and allowed Felton Davis III to get wide open for a 49-yard scoring pass.

"The quick answer is our eyes weren't in the right place," Leach said. "But the answer is we didn't do our job. I did think we unraveled a little bit after that play."

Scott scored on a 3-yard run to give the Spartans a 21-3 halftime time.

Early in the third, Lewerke rolled left and had his pass tipped, but a sliding White caught it for a 7-yard touchdown.

Lewerke, who finished 13 of 21, was hit hard on a keeper in the third quarter and came out for a few plays. His backup, Damion Terry, scored on a 6-yard keeper to make it 35-3.

The Cougars closed the gap when Hilinski threw a 14-yard touchdown pass to Tay Martin late in the third quarter and a 15-yarder to Tay in the fourth quarter.

Scott scored on a 28-yard burst up the middle with about six minutes left to play.

Hilinski was 39 of 50 for 272 yards and two touchdowns, with one interception.

Lewerke said he was "very careful" on his long throw to Davis. "I saw how wide open he was and I tried to throw it right at him and make sure."

Washington State: It was the second straight lackluster Holiday Bowl for Leach's Cougars, who lost 17-12 to Minnesota last year. Besides being without Falk, leading receiver Tavares Martin Jr. was kicked off the team after the regular season and third-leading receiver Isaiah Johnson-Mack left the squad. The Cougars, who started 6-0, were routed in their final two games, including a 41-14 loss to rival Washington.

Michigan State: Scott had his third 100-yard game of the season and ninth of his career. Felton had four catches for 118 yards.

Washington State: Falk will move on to the NFL Draft while Hilinski will take over the Air Raid offense. It was Hilinski who led the Cougars to a comeback victory against Boise State in triple overtime on Sept. 9 after Falk was knocked out of the game.

Michigan State: The young Spartans appear to be in good hands with Lewerke, who was just a redshirt sophomore this season. "We can build off the momentum this game brings us," he said. "We've got a lot of young guys, still a lot of work to be done, a lot of potential to be reached. It's very big for us."