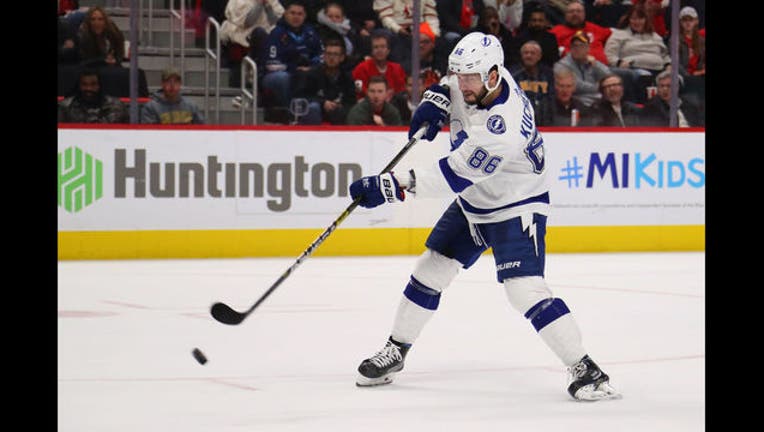 Nikita Kucherov and defenseman Victor Hedman scored in a shootout to give the Lightning a 6-5 comeback victory over the Detroit Red Wings on Tuesday night.

"I didn't think I'd give up five goals and get the win, but this team has so much scoring power you've just got to fight through," said Pasquale, who made 19 saves in regulation and overtime.

According to Lightning coach Jon Cooper, Pasquale said: "Only in Tampa can you give up five and still get the win" as he came off the ice.

"He had some pretty good shooters coming at him, Nielsen and Vanek. He stops them both," Cooper said. "He gave us a chance to pull it out and that's what we did."

Tampa Bay, which has won seven of eight, erased a 5-3 deficit in the third period and overcame Nielsen's hat trick to defeat the Red Wings for the 13th consecutive time in the regular season.

Despite the shootout goal, Kucherov's 10-game point streak came to an end.

Tampa Bay was playing the second of back-to-back games after beating New Jersey 5-1 on the road Monday night.

Paquette's short-handed goal with 5:02 left in regulation tied it at 5. It was his seventh goal.

Miller pulled the Lightning to 5-4 at 9:50 of the third period with his sixth goal.

Nielsen completed his hat trick with 3:34 left in the second to break a 3-all tie with his fourth goal.

Joseph scored twice in the second to give him eight goals this season, and Stamkos got his 10th.

Nielsen scored his second of the game 6:27 into the middle period.

Detroit took a 2-0 lead with goals 21 seconds apart in the first. Nyquist opened the scoring with 3:06 left, and Nielsen scored with 2:45 remaining in the period.

Red Wings defenseman Danny DeKeyser left after the second period with an upper-body injury and coach Jeff Blashill said he expects DeKeyser to be out "multiple weeks."

NOTES: Tampa Bay was without G Andrei Vasilevskiy (broken left foot) and D Anton Stralman (upper body). ... Detroit RW Anthony Mantha missed his first game after breaking his right hand Sunday against Colorado. He had surgery Tuesday afternoon and is expected to miss four to six weeks. ... Red Wings forward Tyler Bertuzzi served the first game of his two-game suspension for unsportsmanlike conduct and roughing against the Avalanche on Sunday.