TAMPA, Fla. - TAMPA, Fla. (AP) — Barclay Goodrow scored a pair of goals and the Tampa Bay Lightning remained undefeated on home ice with a 3-1 victory over the Detroit Red Wings on Friday night.

Pat Maroon also scored for the Lightning, who improved to 5-0 at Amalie Arena. Andrei Vasilevskiy finished with 27 saves. 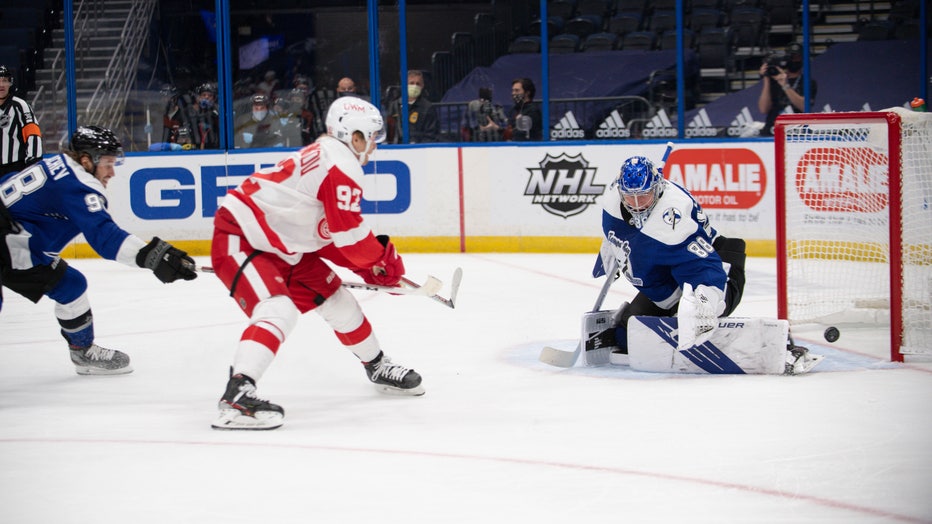 TAMPA, FL - FEBRUARY 05: Tampa Bay Lightning goalie Andrei Vasilevsky (88) makes a save during the 3rd period of an NHL game between the Detroit Red Wings and the Tampa Bay Lightning on February 05, 2021 at Amalie Arena in Tampa, FL.(Photo by Roy K.

Goodrow’s second goal of the game was the 6,000th goal in Lightning franchise history.

Tampa Bay extended its point streak against Detroit to 19 games (18-0-1) and has won 16 consecutive regular-season home games against the Red Wings.

Vladislav Namestnikov scored for Detroit, which is winless in eight games (0-6-2). Thomas Greiss finished with 29 saves.

The Red Wings showed a more concerted effort in the rematch against the defending Stanley Cup champions and were rewarded with the opening goal of the game halfway through the first period.

Namestnikov, a former Lightning first-round pick in 2011, came out from behind the net and established position in front as Filip Zadina shot from the left circle. The shot deflected of Namestnikov and past Vasilevskiy at 10:00.

Tampa Bay tied it at 13:56 as Maroon intercepted a pass curling back in the offensive zone and wheeled to the high slot where he sent a wrist shot through an Alex Killorn screen and past Greiss for his first of the season.

Detroit dominated most of the second period, but it was Tampa Bay that scored the only goal of the frame as Jan Rutta touched a pass back to Goodrow coming off the bench before knuckling a one-timer that hovered just off the ice and through the legs of Greiss, who was screened by Steven Stamkos at 17:29.

Goodrow secured the win with his second of the night from center ice into the open net with 27.3 seconds left for his first career multi-goal game.

DETROIT INJURIES: Detroit RW Filip Zadina returned to the lineup after missing seven games while on the league’s COVID list. C Valtteri Filppula was a scratch, though the team did not offer an explanation before the game.

ON THE BOARD: Maroon’s goal was his first point of the season, the last of Tampa Bay’s 20 skaters to suit up this season to record a point.