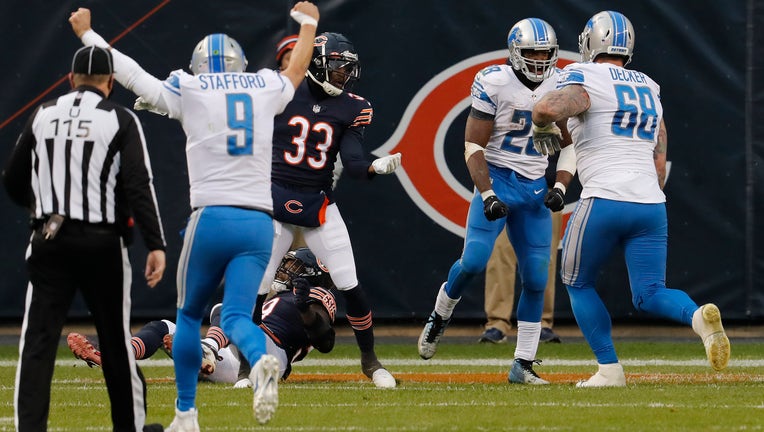 SOUTHFIELD, Mich. (FOX 2) - I’m not even sure where to start on this one. If had written anything after that first half it would have included a lot of really negative things about the team's defense. That was bad. Really bad.

Chicago came in as the worst rushing team in the NFL, yet they gashed the Lions for 106 yards over the first two quarters. That was 24 yards above their average for an entire game. And it wasn’t just the production. It was the look. Guys running basically untouched into the end zone (Patterson). And guys running with defenders hanging on into the end zone (Montgomery).

Mitchell Trubisky was having his normal outing against the Lions. Carving them up for 147 yards,, hitting on 11 of 15 passes to a bevy of open receivers.

Chicago scored on 5 of 6 first-half possessions and led 23-13 at the break on the heels of an impressive drive late in the half. It didn’t feel like it was over but there was no reason for an incredible amount of optimism either.

Now, I’m not pronouncing the Lions cured or Darrell Bevell as the answer to all their problems, but credit where credit is due this team played with a purpose in the second half.

Chicago ran for 34 yards and scored 7 points the rest of the way. The Lions defense stood up and made plays.

I’ve asked where the difference makers are? For One day they had a lot of them. The Bears final 4 possessions - when the Lions were trying to overcome a Matthew Stafford interception and perhaps even win the game?  When there was zero wiggle room? Here's what happened:

Where has that been?  Again, I’ve said it before and I will say it again. The Lions fired their Head Coach and GM last week because they lost too many games. They lost too many games because they couldn’t build a defense.  It looked like another one of those days until somehow they got it together. I know. The Bears aren’t the Packers (they’ll be here Sunday), but baby steps. Make some plays, get a win, go back to work, and get better.

It’s impossible not to feel good for Darrell Bevell. He’s a good man who has a dream of being a Head Coach in the NFL. He has called this an audition. It wasn’t pretty. It was uneven. But…it was a win and that always beats the alternative.