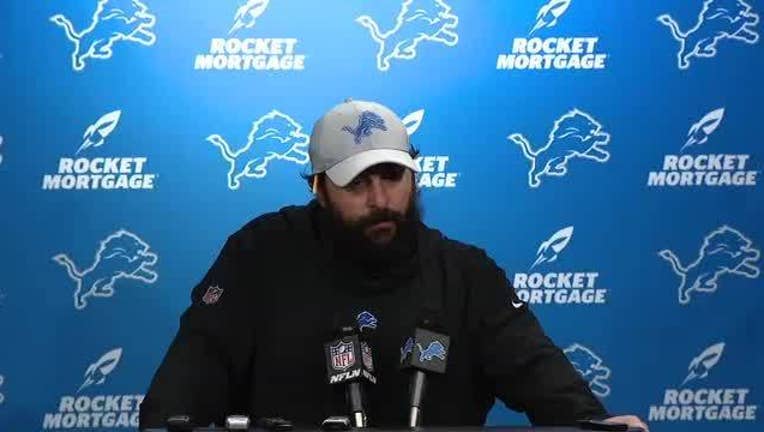 The Packers are 2-1 under Philbin going into their season finale against the Detroit Lions, who have stumbled to the finish line having lost seven of their past nine games.

Coach Matt Patricia's job seems safe, though his first year in the Motor City has definitely been disappointing. With the playoffs out of sight for each team, the Lions and Packers go into their game at Lambeau Field hoping to ride a win into the offseason.

Except that any improvement can't help Detroit in the standings this year. The Lions (5-10) were assured of their first last-place finish since 2012 following a 27-9 loss to Minnesota last week.

After firing Jim Caldwell following a 9-7 record last year, Detroit will finish with a worse record than in any of Caldwell's four years leading the club.

Asked this week if he was told by team management if he would return in 2019, Patricia said that he was "pretty confident. Everything for me right now is just keep moving forward and getting ready for the game this weekend."

While the Packers (6-8-1) are assured of a second straight losing season, they at least seem to be rejuvenated since Philbin was promoted from offensive coordinator to interim head coach following the firing of Mike McCarthy.

A 44-38 win in overtime over the New York Jets finally got the Packers their only road victory of the season. Players have spoken of their respect for Philbin and their desire to win for him.

"It's relatable messages, it's talking about his family and talking about things that are important to him," quarterback Aaron Rodgers said. "And then little nuggets that we can take with us. Easy connection points, I guess is the best way to put it."

Rodgers has known Philbin for a while, going back to the 2010 season when the Packers won the Super Bowl with McCarthy as coach and Philbin in his first stint as offensive coordinator.

Philbin has also won over Davante Adams, who was drafted in 2014 and only started working with Philbin this year.

"So I think that he kind of has his head in the right spot, and ... he's really easy to follow, because you know what you're going to get every day," Adams said. "You know, he makes it clear what he expects from you. That's why I'm a big Joe advocate."

Another win could improve Philbin's case to stay on after this season. Team president Mark Murphy has said that he wants to get a chance to see how Philbin fared over the final four games as Green Bay proceeded with its coaching search.

Other notes and things to watch:

With 111 catches, Adams is two shy of breaking the club record set by Sterling Sharpe in 1993. He's also 134 yards shy of breaking the single-season mark set by Jordy Nelson (1,519) in 2014. He said that he was optimistic that he would play after missing practice at midweek with a knee injury.

Lions safety Glover Quin may be playing in his last NFL game at Green Bay. Quin, who turns 33 next month and has one year left on his contract, insisted he has not decided whether he wants to play next season. He considered retiring after last season.

Quin has started 147 straight games, the longest active streak by an NFL safety. Houston drafted Quin in the fourth round in 2009 out of New Mexico and he signed with the Lions in 2013. Over the past six seasons, he is the league's only player with at least 400 tackles, 15 interceptions, 10 tackles for losses and five forced fumbles.

Linebacker Clay Matthews missed practice at midweek with a back injury, while receiver Randall Cobb sat out while in the concussion protocol. Both veterans are free agents after this season, meaning they could be playing their last games at Lambeau as Packers - if they're healthy enough to play at all. The coaching change leaves an extra layer of uncertainty to the offseason.

Detroit Lions wide receiver Kenny Golladay made the most of the increased opportunities he had when Golden Tate was traded and when Marvin Jones was injured. Golladay, the second-year, third-round pick from Northern Illinois, had 70 receptions for 1,063 yards and five touchdowns after making 48 catches for 477 yards and three scores as a rookie. Eight percent of his catches gave Detroit first downs, trailing only Tampa Bay's Chris Godwin in the category.

The Lions are going for their first four-game winning streak in the series against the Packers since the 1982-83 seasons. Detroit is also trying to win consecutive games at Lambeau for the first time since 1990-91.