Blough, now a quarterback for the Detroit Lions, showed off a special shoe Wednesday with Trent's likeness on it. Trent was the inspirational Purdue fan who died of bone cancer at age 20 on Jan. 1. Blough, who played at Purdue, said he's planning to wear the shoes in Detroit's game at Minnesota this weekend.

Trent was first diagnosed with a rare bone cancer at age 15. He entered Purdue in 2017 while undergoing chemotherapy and received national attention last year by becoming the adopted captain of the football team. 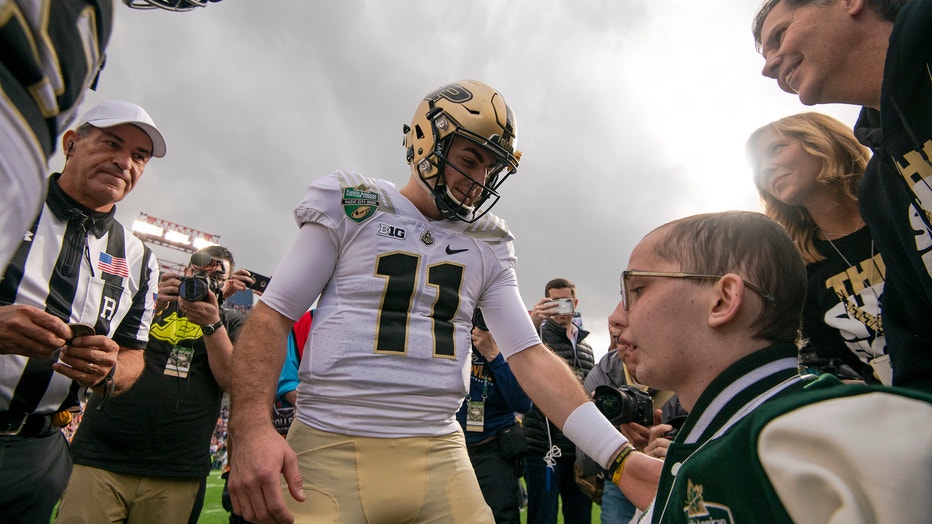 Blough was on that Purdue team, then entered the NFL as an undrafted rookie. He made his pro debut last week when he started for the Lions on Thanksgiving against Chicago. He threw touchdown passes on his first two drives, although Detroit lost 24-20.

It's safe to say Blough is more well known than he was a couple of weeks ago, so it's a good time for him to honor Trent with his special shoes.

“To be able to wear them after last week with all the attention for Tyler is just special," he said. “It brings light to his legacy, his life, his story, what he stood for, and I hope with my actions and play that that can be well represented.”

Blough's opportunity last week came because of injuries to Matthew Stafford and Jeff Driskel. Stafford has missed the past four games - all losses - with back and hip injuries. Driskel injured his hamstring and is now on injured reserve.

Blough's performance against Chicago was all the more impressive because of the short week of preparation leading up to it. Blough will have had a lot more time to get ready for this next game against the Vikings.

“It definitely helps. You get all of those reps with the first-team guys and just last week kind of going through the week, the walk-through, things like that," he said.

Stafford was also in the Detroit locker room Wednesday. He said his recent injury problems haven't affected his long-term outlook.

“I want to play for a long time," Stafford said. “I felt like I was playing really good ball this year, and something that's kind of a freak deal that happened, and obviously got to take it in stride and listen to doctors, my body, coaches, everybody, kind of figure out what's best. But I was having a lot of fun playing when I was out there."