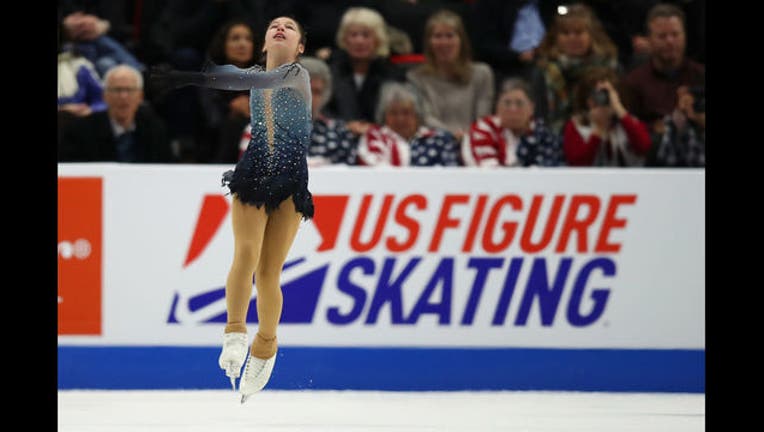 Liu stole the show Friday night, breezing through a free skate that included two triple axels and dethroning 2018 winner Bradie Tennell at the U.S. Figure Skating Championships. Liu became the youngest winner of an individual title at this event, and after her score was posted, she put her hands over her face, overcome with emotion .

"I was just happy that I beat my personal record, and I did a clean long program," Liu said.

Liu had already landed a triple axel in the short program Thursday, and she was in second place behind Tennell entering Friday. Tennell fell during her long program, and Liu, skating immediately after, seized the opportunity. Her first triple axel was in combination with a double toe loop. Then she landed another triple axel, and by the time she finished her performance - set to "Witches of Eastwick" by John Williams - she was beaming.

Tara Lipinski was the youngest women's champion at nationals after winning at age 14 in 1997, and Scott Allen also was 14 when he won in 1964. Now a commentator with NBC, Lipinski was there Friday when her record fell.

"Records are made to be broken," Lipinski said afterward. "It is quite an honor that she is the one to do it. What a phenomenal talent."

Earlier Friday, Madison Hubbell and Zach Donohue took a step toward defending their ice dancing title, finishing atop the standings after the rhythm dance. Hubbell and Donohue will compete for their second straight national championship in the free dance Saturday.

Madison Chock and Evan Bates were second after the rhythm dance, followed by Kaitlin Hawayek and Jean-Luc Baker.

The ice dancing competition was one of the most anticipated events of the week, in part because the top teams have plenty of ties to Michigan. Hubbell was born in Michigan, and she and Donohue used to train there. Chock and Bates are from Michigan as well.

Those two teams now train in Montreal under the same coaches - with Hawayek and Baker there as well.

"We're pretty lucky that we get to train with the best in the world," Donohue said. "We're pushing each other. ... We've got such a unique, incredible atmosphere where we all love each other, we all want to beat each other."

The women's competition was without several big names, with Karen Chen, Mirai Nagasu and Gracie Gold all missing it for various reasons. Now Liu looks like she could provide a boost for American figure skating. The U.S. hasn't won an Olympic medal in women's figure skating since 2006.

"To handle the pressure like she did, and to push the technical envelope as far as she's pushing it, at such a young age, is truly mind blowing," Lipinski said. "I think she's the future of U.S. ladies' figure skating."

The U.S. nationals are being held in Detroit for the first time in 25 years. The 1994 event is best remembered for the attack on Nancy Kerrigan after a practice, but there was a 13-year-old who shined that year too - Michelle Kwan, who finished second.

The 4-foot, 7-inch Liu had already turned heads in August, when she became the youngest woman to land a triple axel in international competition. On Friday, she showed poise and ability on a big stage, although international stardom may have to wait a bit. Under the current age restriction, she's not even eligible to compete at worlds until 2022.

"I'm not too worried about that part," Liu said. "Because I get more time to work on my jumps, skating skills, spins, and just trying to learn more."

Liu received a score of 217.51. Tennell finished second at 213.59, and Mariah Bell was third. Bell was the only skater left after Liu, and she fell during her routine.

Tennell stepped out of a triple loop in a combination early in her program, and she fell attempting a triple lutz.

"Obviously, it wasn't my best skate, and I'm disappointed," Tennell said. "There's always something to be learned from skates like this, so I'm excited to get back home and work harder than ever to fix what I made mistakes on."