DETROIT - Jed Lowrie hit a three-run homer in the first inning for the first of Oakland's eight two-out runs against Matt Manning in the Athletics' 8-6 victory over the Tigers on Thursday.

Mark Canha followed Lowrie's shot with another homer for 4-0 lead. It was the 14th homer of the season for both Lowrie and Canha, and each went to the opposite field to reach the seats. Lowrie drilled a 411-foot shot to left-center, and Canha drove one out to right-center.

Lowrie’s RBI-double in the fourth made it 8-0 before the Tigers battled back by scoring six runs.

Oakland starter Frankie Montas (11-9) had a one-hit shutout through four innings. Victor Reyes’ one-out triple in the fourth was the only hit allowed until Harold Castro led off the fifth with a long home run. 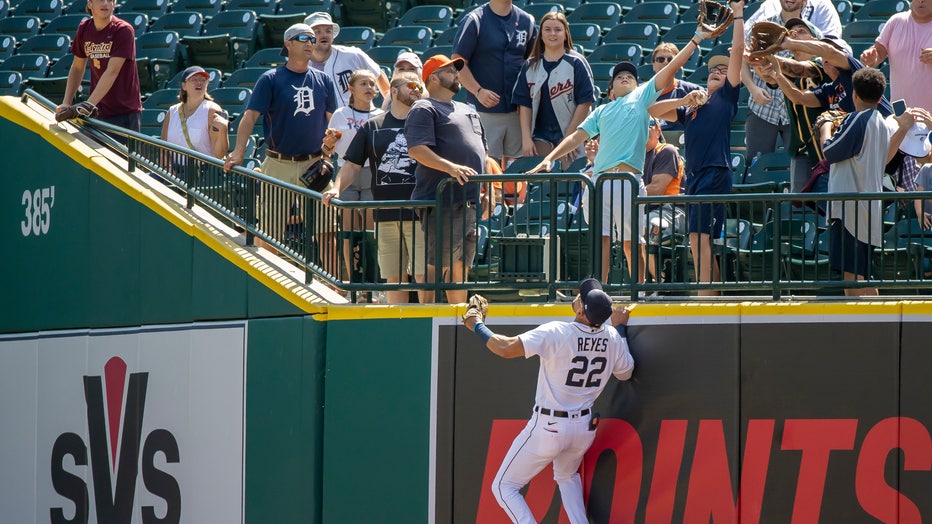 DETROIT, MI - SEPTEMBER 02: Victor Reyes #22 of the Detroit Tigers looks up at a home run by Mark Canha #20 of the Oakland Athletics (not pictured) in the first inning during a MLB game at Comerica Park on September 2, 2021 in Detroit, Michigan. (Pho

Castro’s towering shot into the second row of shrubs beyond the center field wall was estimated at 447 feet. It was only his third of the season, but second homer in two days. Castro, who had 60 singles among 70 hits entering the game, recently decided to try generating more power, and has experienced quick success in that regard.

His homer was the longest by a Tiger at home this season. The only deeper shot by a Detroit hitter this season was Akil Baddoo’s 450-footer in Houston.

Baddoo’s two-run homer, his 12th of the season, ignited the Tigers in the seventh and Montas was relieved by Deolis Guerra. Jeimer Candelario’s three-run homer after a pair of singles cut the lead to two runs.

Detroit turned the tables on Oakland that inning, scoring all five runs with two outs.

Montas was coming off a pair of seven-inning, two-hit shutout starts against two of the most productive offenses in baseball — the San Francisco Giants and New York Yankees. However, the Tigers hit the first homers he’d allowed since July 23 at Seattle to mount a comeback.

Manning (3-6), a 6-foot-6 rookie right-hander, was coming off three consecutive impressive starts. He posted a 3.24 ERA in those outings, but was relieved with two outs in the fourth inning after allowing eight runs on eight hits.

The inability to get that third out in every inning he pitched cost Manning.

Sergio Romo closed out the ninth for his 136th career save.

Candelario made a bid to tie the game, but his drive off Romo went foul before he was retired for the second out on a drive to the warning track in left. Eric Haase grounded out to end the game.