DETROIT - Lucas Raymond scored his first two goals of the season, Ville Husso made 30 saves and the Detroit Red Wings beat the Minnesota Wild 2-1 on Saturday night to end a two-game losing streak.

Raymond finally broke through in the eighth game of the season after scoring 23 times last season as a rookie.

Raymond broke a tie on a power play with 4.3 seconds remaining in the second period. Driving into the goal crease with the puck, he managed to jam it through the legs of goalie Filp Gustavsson before tumbling into the netminder.

Raymond has five goals in three career games against Minnesota. 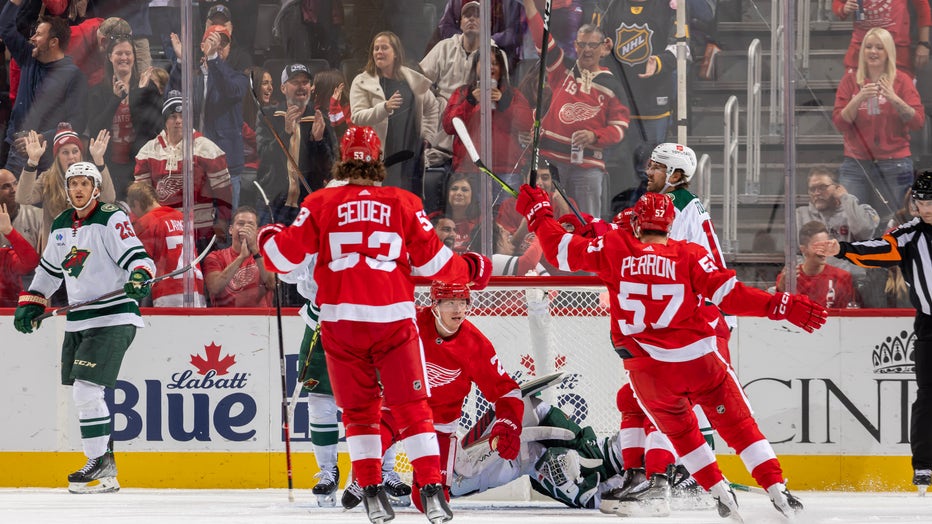 DETROIT, MI - OCTOBER 29: David Perron #57 and Moritz Seider #53 of the Detroit Red Wings skate over to congratulate teammate Lucas Raymond #23 after he scores a goal during the second period of an NHL game against the Minnesota Wild at Little Caesar

Kirill Kaprizov opened the scoring for the Wild at 1:28 of the first period on the second shot of the game. Breaking in on a 2-on-1, Karpizov utilized Jared Spurgeon as a decoy and snapped a high wrist shot under the crossbar behind Ville Husso.

Raymond tied it with 3:09 left in the first. He fired a wrist shot from the bottom edge of the right faceoff circle past Gustavsson on the blocker side.

The Wild lost in regulation for the first time their five-game trip. Minnesota is 2-1-1 on the trip. After opening the season with back-to-back wins, Detroit went 1-2-2 in the five games prior to Saturday.

Both right wing Givani Smith and defenseman Jordan Oesterle made their season debuts for Detroit. Smith was recalled earlier in the day from the Grand Rapids of the AHL.

Lightning: At Buffalo on Monday night.