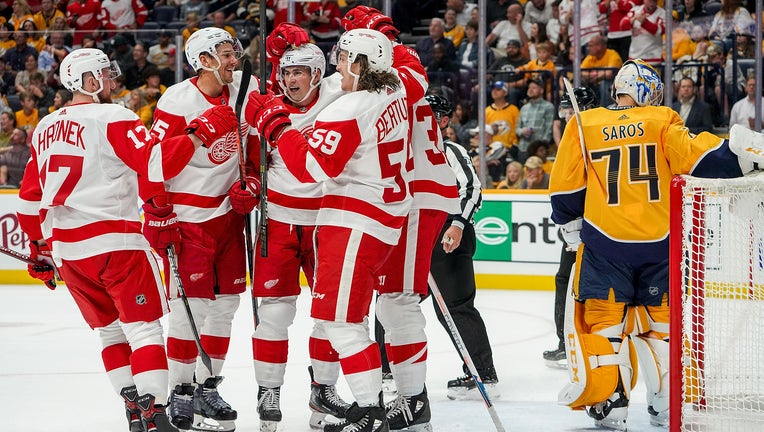 NASHVILLE, TN - OCTOBER 5: Anthony Mantha #39 of the Detroit Red Wings celebrates his goal with teammates against Juuse Saros #74 of the Nashville Predators at Bridgestone Arena on October 5, 2019 in Nashville, Tennessee. (Photo by John Russell/NHLI

NASHVILLE, Tenn. - Tyler Bertuzzi scored twice and had two assists to lead the Detroit Red Wings to a 5-3 victory over the Nashville Predators on Saturday night.

Anthony Mantha added a goal and two assists for Detroit in its season opener. Dylan Larkin had a goal and an assist and Luke Glendening scored for the Red Wings.

Viktor Arvidsson, Filip Forsberg and Mattias Ekholm scored for Nashville, which is 1-1 on the young season.

Midway through the third with the game tied, Glendening scored the go-ahead goal with a wrist shot from the right circle that glanced off the mask of Nashville goaltender Juuse Saros and into the net.

Bertuzzi scored the game's first goal at 10:29 of the opening period.

From above the left faceoff dot, Larkin sent a cross-ice pass through the slot to Bertuzzi at the right faceoff dot, where he beat Saros with a one-timer high to the glove side.

Just 1:11 later, Mantha made it 2-0. From inside the Detroit blue line, Mantha carried the puck up ice into the Nashville zone. He fanned on his initial attempt, but then connected on a backhand shot as he was falling to the ice and beat Saros between the pads.

Arvidsson cut the Detroit lead in half at 4:40 of the second.

Matt Duchene had the puck below the goal line just to the right of the Detroit net. There, he made a blind backhand pass to Arvidsson in the low slot, where he beat Red Wings goaltender Jimmy Howard low to the stick side with a wrist shot. Howard made 39 saves.

Arvidsson has a goal in each of Nashville's two games this season. He set a Nashville franchise record last season with 34 goals.

An unchecked Forsberg skated from the left half boards to the left circle, where he beat Howard with a wrist shot on the short side.

Detroit briefly took a 3-2 lead at 4:02 of the third on Larkin's first of the season, but Ekholm responded 46 seconds later to tie the game at 3.

Bertuzzi added an empty-net goal to cement the victory for Detroit.

Notes: Detroit has beaten Nashville in 10 of 11 games since Peter Laviolette has been the Predators coach. ... Duchene has five assists in his first two games as a Predator. ... Chris Kirkpatrick and Joey Fatone of the band NSYNC attended the game.