DETROIT - Julio Rodriguez and Ty France hit back-to-back home runs in the third inning and the Seattle Mariners completed a three-game series sweep by defeating the Detroit Tigers 7-0 on Thursday.

France and Curt Casali drove in two runs apiece as the Mariners won for the sixth time in seven games. The Tigers were shut out for the 18th time this season.

Logan Gilbert (11-5), who had gone winless in his previous nine starts, held Detroit to two hits and a walk while striking out nine in six innings. Gilbert's last victory came on July 5. 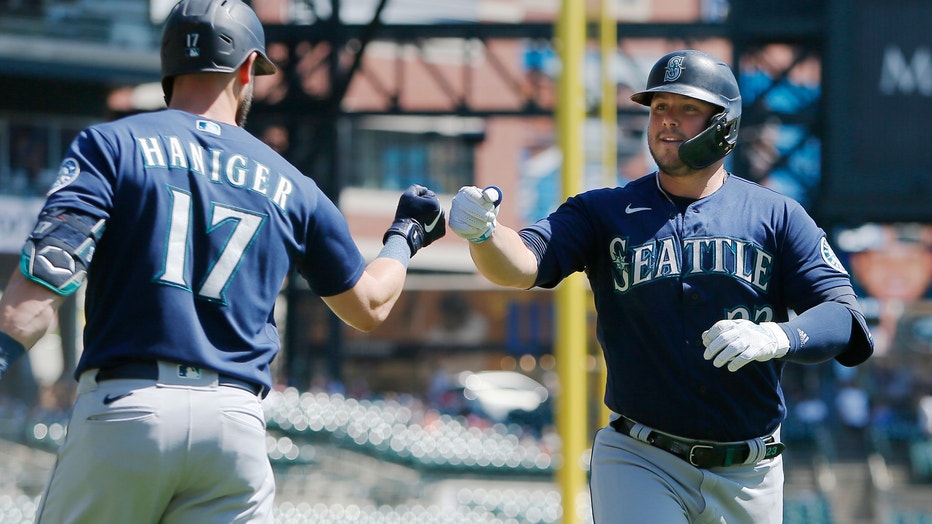 DETROIT, MI - SEPTEMBER 1: Ty France #23 of the Seattle Mariners celebrates with Mitch Haniger #17 after hitting a solo home run against the Detroit Tigers during the third inning at Comerica Park on September 1, 2022, in Detroit, Michigan. (Photo by

Seattle scored an unearned run in the first on Eugenio Suarez's RBI single. Rodriguez blasted his 22nd homer on Eduardo Rodriguez's first pitch of the third inning. France followed with his 17th homer.

The Mariners increased their lead to 6-0 in the fourth on Casali's two-run double and France's run-scoring single.

Mariners: LHP Matt Boyd was reinstated from the 60-day Injured List and OF Taylor Trammell was recalled from Triple-A Tacoma as major league rosters expanded to 28 players. Boyd, who made 143 starts for Detroit from 2015-21, was acquired from San Francisco. Trammell has appeared in 32 games with the Mariners this season, batting .235 with three home runs.

Boyd, who underwent flexor tendon surgery last year, recorded three groundouts during the eighth inning in his Seattle and season debut. Trammell batted ninth and went 0-for-3 with a walk.

Tigers: 1B Spencer Torkelson and INF Ryan Kreidler were called up from Triple A Toledo and RHP Michael Pineda (right triceps strain) was reinstated from the 15-day injured list. Pineda will start against Kansas City on Saturday. INF Zack Short was optioned to Toledo and RHP Rony Garcia (right shoulder soreness) was transferred to the 60-day IL.

Mariners: RHP Luis Castillo (5-5, 2.85 ERA) will start the opener of a three-game series in Cleveland on Friday. Castillo held the Guardians to one run while striking out 10 in six innings on Saturday but wound up with a no-decision.

Tigers: RHP Drew Hutchison (2-7, 4.01 ERA) will start the opener of a three-game home series against Kansas City on Friday. Hutchison has only allowed 10 earned runs in his last six starts.