Columbus - Elvis Merzlikins got a fifth shutout in his last eight starts and the Columbus Blue Jackets extended their points streak to 10 games with a 2-0 win over the Detroit Red Wings on Friday night.

Zach Werenski’s second-period goal, his 17th of the season, broke a franchise season scoring record for defensemen for the Blue Jackets, who have won three straight and nine of 10. 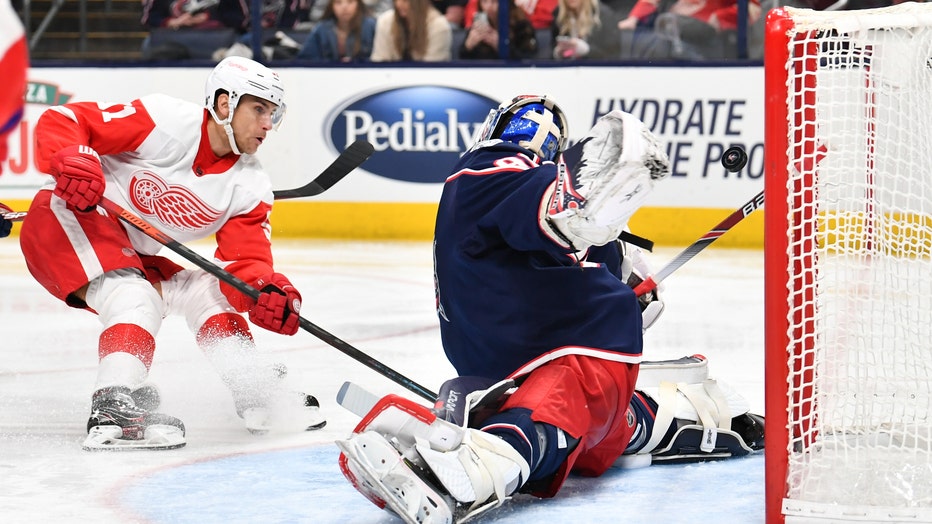 COLUMBUS, OH - FEBRUARY 7: Goaltender Elvis Merzlikins #90 of the Columbus Blue Jackets defends the net as Valtteri Filppula #51 of the Detroit Red Wings shoots the puck off the post during the second period of a game on February 7, 2020 at Nationwid

Columbus dominated in the game, outshooting Detroit 44-16, but had trouble finding the back of the net with veteran goalie Jimmy Howard in goal. Howard faced a shooting gallery at times, finishing with 42 saves and slipping to 2-21-2 on the season. The 35-year-old has lost 18 straight and hasn’t won since October.

Columbus has been on a roll the past two months. They are 9-0-1 in the last 10 and 19-2-5 since Dec. 9, earning 43 of their 69 points in that stretch. The win moved them back into third place in the Metropolitan Division.

Detroit is looking for answers in one of the worst seasons in years. The Red Wings had lost nine a row before a shootout win over Buffalo on Thursday night, but had difficulty generating many quality scoring attempts on Friday.

But Columbus let the Wings hang around, clinging to a 1-0 lead after two periods with a 21-4 edge in shots. The Blue Jackets finally got the insurance goal from Boone Jenner with 1:25 left after Detroit pulled its goalie.

Merzlikins had one of his easiest games since becoming the starter Dec. 31, after Joonas Korpisalo went down with a knee injury. He is 12-2-0 since then.

The Blue Jackets failed to score on three power plays, highlighting one of their weaknesses during the streak.

NOTES: Columbus signed D Dean Kukan to a two-year contract extension. ... Red Wings D Patrik Nemeth played in his 300th NHL game and D Filip Hron played in his 100.... Detroit F Darren Helm missed the game with an undisclosed injury. D Madison Bowey left the game in the first period and didn't return. ... Detroit was penalized twice for having too many men on the ice during a shift change.