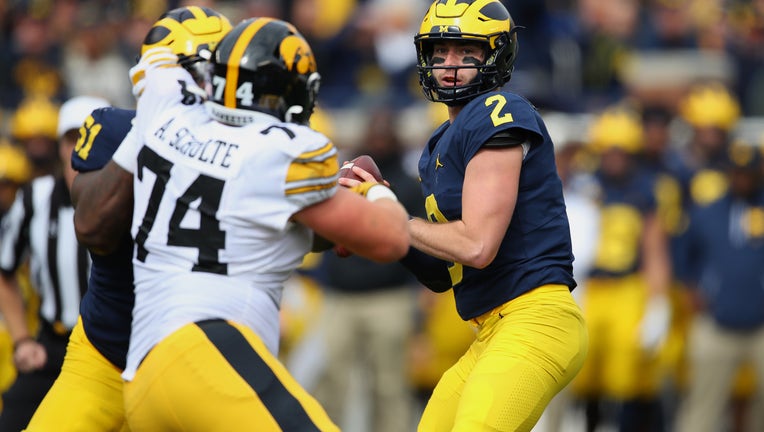 Jim Harbaugh and his players say they often see their new-look offense clicking behind closed doors, taking advantage of speed in space.

No. 16 Michigan (4-1, 2-1 Big Ten) is hoping to carry over success with the ball into games when everyone is watching.

The Fighting Illini haven't put up much resistance during their three-game losing streak, giving up nearly 39 points per game to Eastern Michigan, Nebraska and Minnesota.

The Wolverines have a shot to put together a feel-good performance as they did in a 52-0 win over Rutgers two weeks ago. Michigan may need a boost of confidence, coming off a 10-3 victory against Iowa in which it was held scoreless over the last three quarters.

During games, big plays have been rare on the ground and through the air.

"You see it in practice all the time," offensive tackle Jon Runyan said. "I'm not worried about it."

Harbaugh insists first-year offensive coordinator Josh Gattis has the unit hitting its stride and players seem to believe the same.

"The sky really is the limit for this offense," quarterback Shea Patterson said. "It's just a matter of time."

Here are some things to watch when Michigan plays at Memorial Stadium for the first time since 2011:

Illinois' best chance to pull off an upset, or at least keep the game close, may be tied to a trend.

The Illini lead the Big Ten with nine forced fumbles and eight recoveries. Michigan, meanwhile, has lost seven fumbles to rank 13th in the conference and among the worst in major college football

Michigan: Linebacker Josh Ross is expected to miss his third straight game with an undisclosed injury. Harbaugh declined to give an update on defensive end Kwity Paye, who left last week's game with an apparent hamstring injury, and tight end Sean McKeon, who was injured in the Wisconsin game. It also is not clear if backup quarterback Dylan McCaffrey has been cleared to play after leaving the third game of the season with a concussion.

Illinois: Quarterback Brandon Peters, a graduate transfer from Michigan, left last week's loss at Minnesota with an upper body injury and it isn't clear if he will be healthy enough to face his former teammates.

"I know he's pumped up and of course hoping he'll be ready to go this week," Lovie Smith said.

If Peters isn't cleared, Matt Robinson will likely start in his place. The sophomore was 15 of 29 for 125 yards in his first extended opportunity to play last week in relief of Peters.

"He did OK for a backup quarterback coming into a game in a tough situation," Smith said. "I think we could have helped Matt with some of the passes we dropped."

Harbaugh has used a unique approach to kicking, rotating Jake Moody and Quinn Nordin. Moody is 5 of 6 on field goals, missing his first kick last week. The alternating opportunities have left Nordin with 55-yard and 58-yard field goals he has missed.

"Both are kicking really well," Harbaugh said. "I think they're in a good rhythm. They're confident with their preparation and the flow in game."

Illinois is unveiling a larger-than-life bronze statue of Dick Butkus, who helped the program win the 1964 Rose Bowl before going on to have a Hall of Fame career as an all-time great NFL linebacker.

Butkus is expected speak to the team.

"If you need a little more motivation, than I know Dick Butkus can give you that," Smith said. "He's gonna pump the guys up and get them ready the best he can.