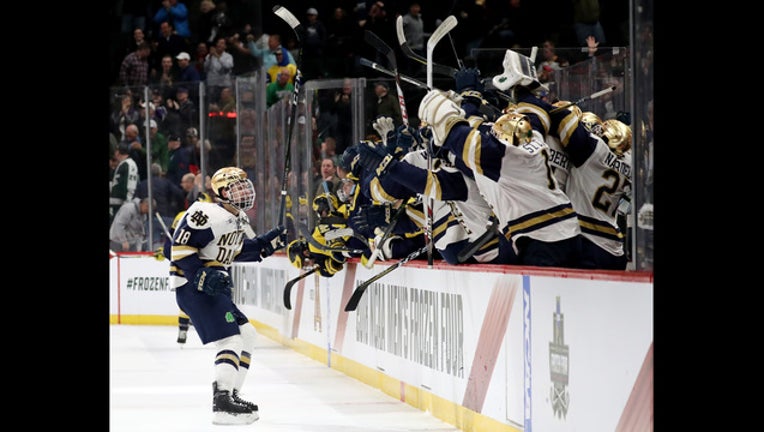 ST PAUL, MN - APRIL 05: Jake Evans #18 of the Notre Dame Fighting Irish celebrates his game winning goal with teammates on the bench in the final seconds of the game against the Michigan Wolverines during the semifinals. (Photo by Elsa/Getty Images)

ST. PAUL, Minn. (AP) - Notre Dame won another nail-biter, and this one has the Irish on the verge of a school first.

Jake Evans scored his second goal of the game with 5.2 seconds left and Notre Dame beat Michigan 4-3 on Thursday night in the Frozen Four semifinals.

It is the fifth straight postseason game that Notre Dame has scored in the final minute or overtime.

Charging down the slot, Evans redirected a pass from Cam Morrison past Hayden Lavigne to send the Irish to their second championship game in school history.

"I knew there was a little bit of time left so I thought I'd give it one last rush and Cam just did a really good job of putting it out there for me," Evans said.

Notre Dame, which fell to Boston College for the 2008 title, will face Minnesota Duluth on Saturday for the title. The Bulldogs scored two quick goals and held off Ohio State 2-1 in the other semifinal.

It's been a dramatic ride for the Irish. Dylan Malmquist scored with 27 seconds left to beat Providence 2-1 to get to the Frozen Four. That goal came a day after Jordan Gross scored in overtime to beat Michigan Tech 4-3. Morrison scored in overtime to beat Ohio State 3-2 in the Big Ten Tournament final after Jack Jenkins scored with 31 seconds left to beat Penn State 3-2 the game before.

"We've got so much confidence right now that when we're down one, down two or they get a late goal we're a calm team," Evans said.

Andrew Oglevie had a goal and an assist, Cal Burke also scored, and Cale Morris stopped 25 shots for the Irish (28-9-2). Gross had two assists.

The Big Ten-champion Irish have five straight wins, but are 9-6-1 in their last 16 games since a 16-game win streak ended Jan. 21.

"If you look back to when we had that 16-game winning streak we were winning a lot of 1-0, 2-1 games," coach Jeff Jackson said. "We've always been concerned a little bit about our scoring depth. We got a real good defensive group and a good goaltender. If we can get timely scoring that's the most important thing."

Tony Calderone and Dexter Dancs had a goal and an assist and Michael Pastujov also scored for the Wolverines (22-15-3), who lost for just the fourth time in 14 games. Lavigne made 25 saves.

Burke gave the Irish a 3-2 lead early in the third, but Patujov scored on a rebound with 5:22 left in regulation to tie the game 3-3.

"Once we got behind, we saw the desperation we needed to play with from the start," said Michigan coach Mel Pearson.

Calderone scored midway through the first and Dancs shot from the left wall deflected off the arm of Notre Dame's Dennis Gilbert in front of the net for a 2-0 Michigan lead 17 seconds into the middle period.

Oglevie answered for Notre Dame just over two minutes later with his eighth power-play goal of the season and a one-timer from Evans tied it at 6:20.