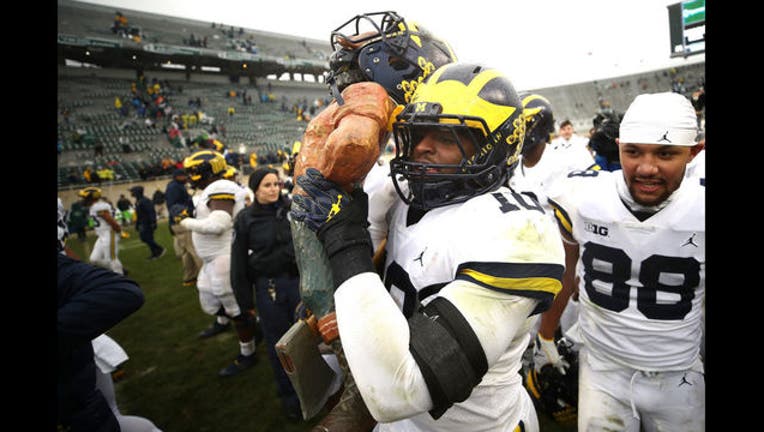 ANN ARBOR, Mich. (AP) - In the same hour, Michigan had an expected departure and a surprise signing.

Star linebacker Devin Bush announced Wednesday he will skip his senior season and enter the NFL draft. He shared his decision on Twitter and Instagram on Wednesday shortly after the Wolverines welcomed five-star defensive back Dax Hill to its 20-plus player recruiting class .

The 6-foot, 190-pound Hill, who is from Tulsa, Oklahoma, had committed to play at Alabama after previously planning to attend Michigan. He is the younger brother of Oklahoma State running back Justice Hill.

The Wolverines, whose recruiting class is ranked among the top 10 in the country by 247 Sports, appear to have playing time available for their top freshmen next season.

Hill, one of the top players in the country at any position, appears to be talented enough to slide into the starting safety spot vacated by senior Tyree Kinnel.

Charbonnet, a 6-1, 222-pound running back from California, and Hinton, a 6-4, 285-pound defensive lineman from Georgia, also seem to have a clear path to earn playing time next fall. The Wolverines will lose their leading rusher, senior Karan Higdon, and the defensive line has to replace three starters.

Michigan's offensive line will be bolstered by at least six recruits, including three players ranked among the top 20 at their position: Ohio's Nolan Rumler, Trevor Keegan of Illinois and Georgia's Trente Jones.

Bush leaves a huge hole in the middle of the defense, which will also be without defensive end Rashan Gary and also may lose cornerbacks Lavert Hill and David Long before their senior seasons to the NFL. Junior quarterback Shea Patterson insisted earlier this month he hadn't thought about whether to stay in school or pro, adding he plans to discuss his future with coach Jim Harbaugh and family members.

The eighth-ranked Wolverines will play No. 10 Florida on Dec. 29 in the Peach Bowl .

Bush earned Associated Press All-America second team and Big Ten defensive player of the year honors this year. The junior also finished third in voting for the Butkus Award as the nation's best linebacker. Bush led the Wolverines with 79 tackles and ranked second on the team with nine tackles for losses and five sacks before his season ended with a hip injury against Ohio State.

"Despite getting treatment every day, I have not been cleared to practice or play in the Peach Bowl due to the hip injury I suffered in the last game," Bush posted on social media. "Due to this injury, I have thought hard about my future in football. Having been injured I realize how fleeting this sport can be. It has always been a dream of mine to follow in my father's footsteps and play in the NFL."

Devin Bush Sr. was drafted by Atlanta in the first round in 1995 draft and started in 71 of 116 games over eight seasons with the Falcons, St. Louis and Cleveland. He helped the Rams win a Super Bowl.