ANN ARBOR, Mich. - When Michigan faces Michigan State Saturday, the actual 60 minutes of football are only part of the show. Pay close attention to what’s done pregame and said postgame. The participants tend to remember.

The game begins at noon. Watch live right here on FOX 2 or online by downloading the FOX Sports app.

Consider last year’s matchup in East Lansing: Well before kickoff, Michigan State players walked across the field with linked arms, making contact with Michigan players who were there. Wolverines linebacker Devin Bush was so incensed he used his cleats to scuff up the Spartans’ midfield logo.

The Big Ten fined Michigan State after that, so perhaps both teams will be on their best behavior before they meet again Saturday in Ann Arbor.

“That’s been addressed pretty thoroughly,” Michigan coach Jim Harbaugh said. “If there are any pregame traditions, those take place before the two-hour mark - when both teams, at two hours, are allowed to be on the field and share the field.”

After the game last year - a 21-7 Michigan win - Harbaugh was more pointed, calling the pregame incident “bush league” and drawing a reprimand from the league for his comments. That was just another chapter in a heated in-state rivalry in which each school keeps a close eye on what the other does - and says.

It was a postgame comment in 2007 by Michigan’s Mike Hart - calling Michigan State a little brother - that set Dantonio off. The Spartans won eight of the next 10 games in the series. Along the way, Michigan State defensive coordinator Pat Narduzzi - now the coach at Pittsburgh - got himself in a bit of trouble for saying the Spartans tried to play “60 minutes of unnecessary roughness” after a flag-filled win over the Wolverines in 2011.\ 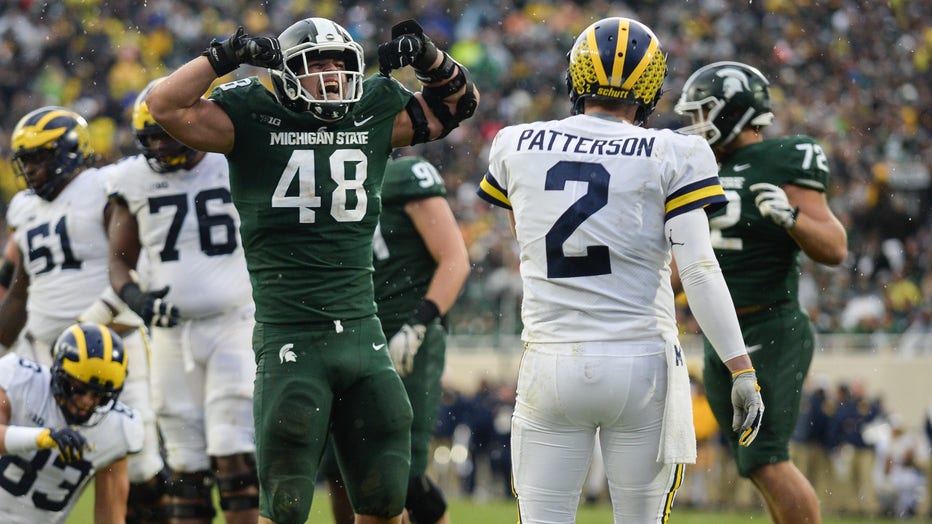 Before the 2014 meeting, the Wolverines planted a tent stake in the field at Spartan Stadium, a gesture that annoyed Dantonio so much he had Michigan State keep driving for a touchdown in the final minute of a 35-11 victory.

Before last year’s matchup, Dantonio pointed out that the previous few games against Michigan had been characterized by good sportsmanship and respect. Then the pregame brouhaha unfolded. Both coaches have acted this week like that’s in the past. Just a routine dispute. Can’t have a rivalry without them.

“If you don’t like confrontation, best stay home,” Dantonio said.

Michigan State (4-5, 2-4 Big Ten) enters this game at No. 14 Michigan (7-2, 4-2) on the heels of four straight losses. The Spartans blew a 21-point lead in the fourth quarter last weekend and lost at home to Illinois. They might make a bowl game, they might not.

In a sense, the biggest thing they have left to play for is a win over Michigan.

“They have to show up and play just like we do. Any team can lose at any time,” Michigan State linebacker Antjuan Simmons said. “I wouldn’t bet a single dime against us, no matter what. We’re ready, and we’re going to come to play.”

Michigan lost to Penn State and Wisconsin earlier this season, but the Wolverines got a much-needed win over a big-name rival late last month when they routed Notre Dame 45-14. They’re favored by double digits this week.

This one gets trotted out seemingly every year: The team with more yards rushing usually wins. That’s now happened in 44 of the last 49 meetings between the Wolverines and Spartans.

Brian Lewerke is the first Michigan State player to throw for 7,000 yards and rush for 1,000 in his career. Michigan counters with a senior of its own in Shea Patterson.

The Spartans lost standout linebacker Joe Bachie last month when he was declared ineligible after testing positive for a banned supplement. Michigan State was also without leading receiver Darrell Stewart last weekend because of an injury, and he’s not listed on the depth chart this week.