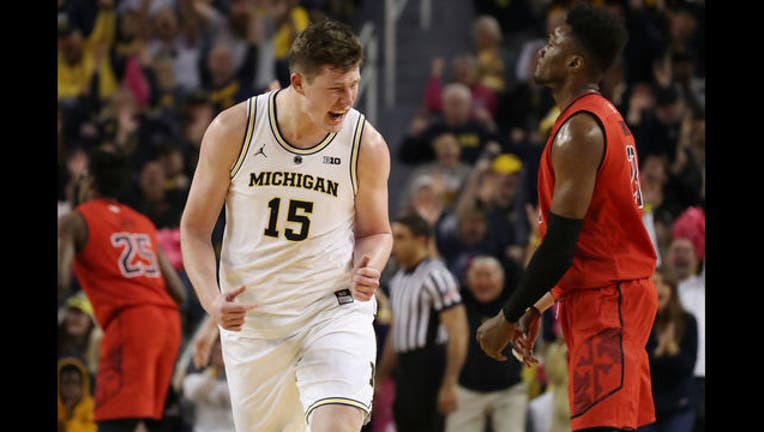 ANN ARBOR, MICHIGAN - FEBRUARY 16: Jon Teske #15 of the Michigan Wolverines reacts after making a three point basket next Bruno Fernando #23 of the Maryland Terrapins during the second half at Crisler Arena. (Photo by Gregory Shamus/Getty Images)

NEW YORK (AP) - Duke has reclaimed the No. 1 spot in the AP Top 25 college basketball poll.

The Blue Devils earned 58 of 64 first-place votes in Monday's poll to earn a third stint at the top this season. Duke replaced Tennessee, which had spent four weeks at No. 1 but fell to fifth after Saturday's loss at Kentucky.

Gonzaga moved up a spot to No. 2, followed by Virginia and John Calipari's Wildcats.

LSU made the week's biggest jump, climbing six spots to No. 13 after last week's win at Kentucky. Kansas State fell five spots to No. 23 for the biggest slide.

No new teams joined the Top 25 for the first time this season.

The top 25 teams in The Associated Press' college basketball poll, with first-place votes in parentheses, records through Feb. 17, total points based on 25 points for a first-place vote through one point for a 25th-place vote and last week's ranking: