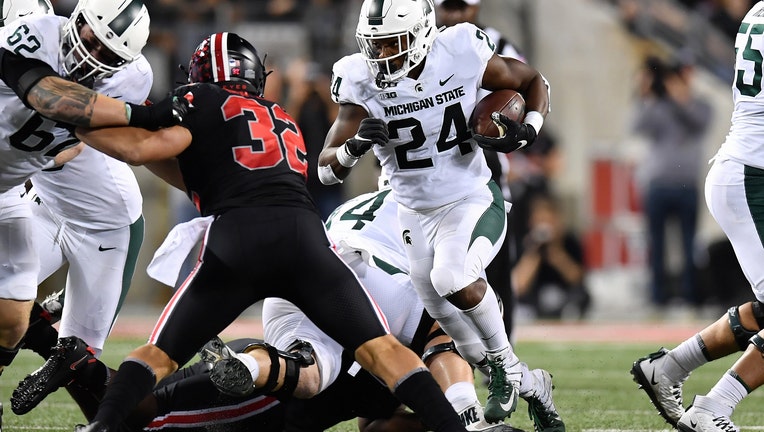 COLUMBUS, OH - OCTOBER 5: Elijah Collins #24 of the Michigan State Spartans runs with the ball against the Ohio State Buckeyes at Ohio Stadium on October 5, 2019 in Columbus, Ohio. (Photo by Jamie Sabau/Getty Images)

After thumping Kent State, No. 8 Wisconsin looks to stay unbeaten when it steps back into Big Ten play and hosts Michigan State. The Badgers look to continue to build their resume as one of the top team's in the country, while the Spartans look to rebound from a 24-point loss at Ohio State.

Michigan State WR Darrell Stewart Jr. leads the Big Ten in receiving with 41 receptions and 624 yards. The 6-foot-2 senior will face CB Faion Hicks and a Wisconsin defense that is allowing a nation-low 131 yards passing per game.

Michigan State: CB Josiah Scott had a career-high 12 tackles and an interception last week against the Buckeyes. The junior has six career interceptions.

Wisconsin: RB Jonathan Taylor has rushed for at least 100 yards in each of the Badgers' five games this season and leads the nation with 16 touchdowns (12 rushing and four receiving). With 4,916 career yards rushing, Taylor needs 84 more to join Herschel Walker (5,596), Ron Dayne (5,091) and LaMichael James (5,082) as the only players to rush for 5,000 yards through their junior season.