East Lansing - Foster Loyer scored a career-high 16 points in his start for Michigan State and the No. 14 Spartans shook off a slow start without All-American Cassius Winston to rout Western Michigan 95-62 on Sunday night.

Loyer took over at point guard with Winston sidelined after bruising a bone in his left knee during practice Friday. 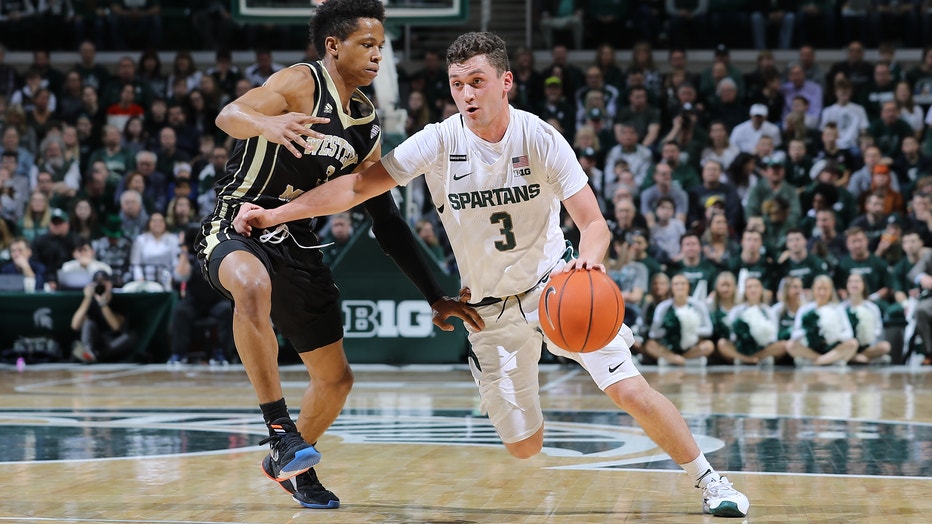 EAST LANSING, MI - DECEMBER 29: Foster Loyer #3 of the Michigan State Spartans drives past B. Artis White #3 of the Western Michigan Broncos in the first half at Breslin Center on December 29, 2019 in East Lansing, Michigan. (Photo by Rey Del Rio/Get

Hoiberg, the son of Nebraska coach and former NBA player and coach Fred Hoiberg, scored four points and had a career-high six assists.

Loyer scored 11 points in the second half and was 4 for 4 on 3-pointers. He had three 3-pointers during a stretch where the Spartans pushed the margin past 40 points, topping out at 89-44 with 4:44 remaining.

Western Michigan: The Broncos need a bounce-back season in the Mid-American Conference for coach Steve Hawkins. They went 8-24 last season, the worst record in his first 16 seasons at Western Michigan.

Michigan State: Assuming Winston’s absence was more precautionary, the Spartans are rounding into more of a typical Izzo team, unlike early on when they were embarrassed 87-75 by Duke at the Breslin Center.

Freshman Rocket Watts returned to the court for Izzo after missing four games with a leg injury. He scored nine points in 12 minutes.

Western Michigan: It’s MAC play the rest of the way for the Broncos, who open conference play Saturday at home against Ohio.

Michigan State: The Spartans host Illinois on Thursday and No. 11 Michigan on Jan. 5.