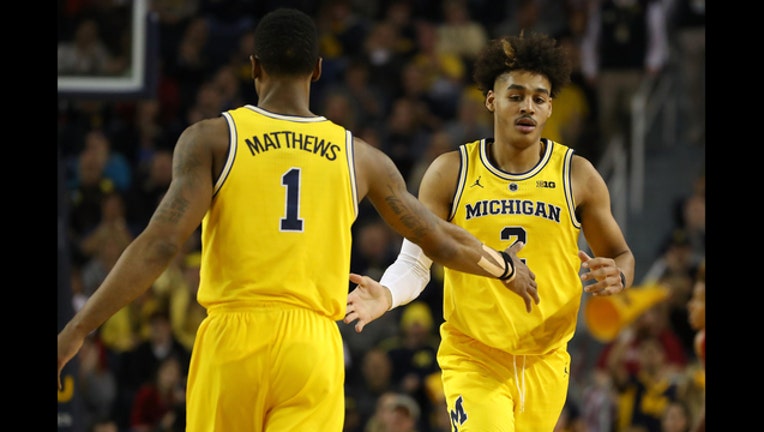 ANN ARBOR, MICHIGAN - JANUARY 06: Jordan Poole #2 of the Michigan Wolverines celebrates a second half basket with Charles Matthews #1 while playing the Indiana Hoosiers at Crisler Arena on January 06, 2019 in Ann Arbor, Michigan. Michigan won the gam

NEW YORK (AP) - Duke remained at No. 1 for a fourth straight week while the top 10 remained unchanged in the latest AP Top 25 men's college basketball poll.

The Blue Devils received 36 of 64 first-place votes for their sixth week at No. 1 this season after wins at Wake Forest and Florida State, the latter coming on a last-second 3-pointer by freshman Cam Reddish. Second-ranked and unbeaten Michigan earned nine first-place votes, third-ranked Tennessee had 13 and fourth-ranked Virginia - the only other unbeaten team - had the remaining six.

Gonzaga, Michigan State, Kansas, Texas Tech, Virginia Tech and Nevada rounded out the rest of the top 10 for a second straight week. The changes started from there after a week that saw 12 of the 15 teams outside the top 10 lose at least once, with five of those losing twice.

FSU climbed two spots to No. 11 despite the Duke loss, followed by No. 12 Kentucky - which joined No. 15 Marquette as the week's biggest climber by rising six spots. No. 16 Buffalo and No. 20 Oklahoma rose three spots.

No. 24 Mississippi State fell 10 spots for the biggest slide among ranked teams, while No. 21 Houston fell four spots.

There were four new teams in the poll, led by No. 18 Mississippi - which is ranked for the first time since January 2013. No. 19 Maryland, No. 22 Villanova and No. 23 Iowa returned after appearances earlier this season.

Ohio State, Iowa State, St. John's and TCU all fell out of the poll after two-loss weeks.

The top 25 teams in The Associated Press' college basketball poll, with first-place votes in parentheses, records through Jan. 13, total points based on 25 points for a first-place vote through one point for a 25th-place vote and last week's ranking: