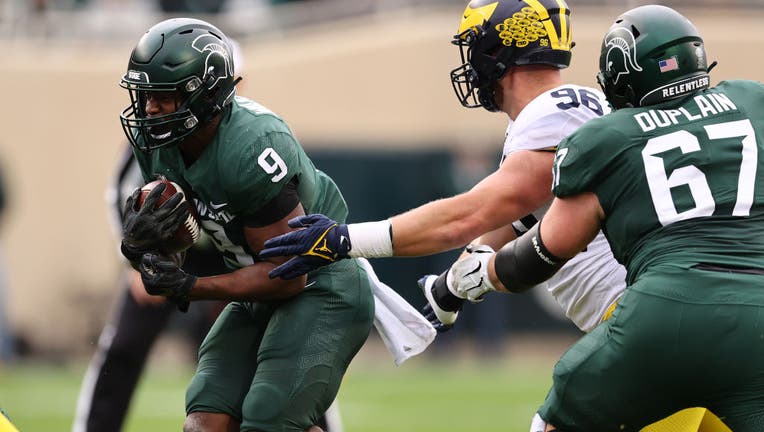 EAST LANSING, MICHIGAN - OCTOBER 30: Kenneth Walker III #9 of the Michigan State Spartans tries to get around the tackle of Julius Welschof #96 of the Michigan Wolverines during the first half at Spartan Stadium on October 30, 2021 in East Lansing, M

EAST LANSING, Mich. (FOX 2) - You can add another legendary tale to the heated rivaly between Michigan and Michigan State - this time a Spartan who scored five touchdowns to carry his team to victory.

The Michigan State Spartans had a Heisman frontrunner leading them and he continued to make his case as the best player in the NCAA with 5 touchdowns against the Michigan Wolverines.

Kenneth Walker III scored 5 touchdowns and racked up 197 yards on Saturday as MSU keeps the Paul Bunyan Trophy in East Lansing with a 37-33 win over Michigan.

MORE: Tom Brady, Trouble with the Snap, and 21-point underdogs – The past two decades of the Michigan-MSU rivalry.

Walker's fifth touchdown of the day came after Michigan dropped the ball during an attempted run play and MSU capitalized with a 23-yard touchdown run from Walker.

Michigan's final drive stalled on the MSU 31-yard line on a 4th down. MSU took over to try and work the clock but Michigan called all three timeouts to get the ball back with 1:15 left in the game and the final drive starting at 33 yard line.

Following a roughing the passer call on MSU, McNamara was picked off, allowing MSU the chance to run the final minute down on the clock.

Down 16 at one point, MSU stormed all the way back thanks to two 2-point conversions and five touchdowns from Walker. It was MSU's largest come-from-behind win since 2004.

Michigan came out of halftime up 23-14 and appeared to be pulling away by scoring a field goal in the first drive of the 3rd quarter. An MSU 3-and-out followed by a quick 5-play, 54-yard drive ended with a 19-yard touchdown pass to Mike Sainristil that put Michigan up 30-14 midway through the 3rd quarter and in the driver's seat.

But MSU wasn't giving in. Facing 4th and 4 from the Michigan 29, MSU QB Payton Thorne connected with Jayden Reed for 28 yards to Michigan 1 yard line. MSU RB Kenneth Walker punched in his 3rd touchdown of the day and the Spartans got the two-point conversion to draw within 8.

Michigan then drove to midfield before the drive stalled out and the Wolverines were forced to punt it away - the first of the game for either team. MSU then drove 86 yards, with Walker picking up 58 yards on a touchdown run, his 4th of the day after putting up two in the first half.

The Spartans went for 2 again and tied the score at 30.

Michigan drove down for another field goal, Jake Moody's fourth of the day to take a 3 point lead.

MSU went three and out followed by a Michigan fumble at their own 41 yard line, recovered by MSU.

Walker again cashed in on the turnover with fifth touchdown of the day. This one a 23-yard touchdown run to give MSU a 37-33 lead with a little more than 5 minutes left.

On a key 4th and 4, Jim Harbaugh opted to go for it deep within their own territory and McNamara connected with Sainristil for a 1st down to keep the drive alive.

With the drive still moving, Michigan drove down to the MSU 31-yard line before going for it on 4th down again. MSU appeared to have gotten away with a defensive pass interference on the play but no flags were thrown.

Michigan State had the ball first and seemed to be having their way with Michigan until a Payton Thorne interception at the Michigan 3-yard line.

Backed up against their own endzone on 3rd down, Michigan's Cade McNamara connected with Andrel Anthony across the middle and Anthony outran the Spartan defense for a 93-yard touchdown score.

The two teams then traded punts before Thorne threw a second interception. Michigan again capitalized on the turnover, adding three to lead 10-0.

MSU then started to build some momentum with a 27-yard touchdown run from Kenneth Walker III.

Michigan added another field goal followed by an 8-yard touchdown run from Walker for MSU.

With the score 14-13, Michigan drove down in 3-and-a-half minutes and added another touchdown with J.J. McCarthy pulling in a touchdown pass from 17 yards out.

MSU got the ball back, looking to add some points before the half but was stuck in reverse and Thorne was stripped of the ball with a Michigan recovery in the endzone. However, the play was reversed on replay and MSU was able to punt the ball away rather than give up the score. 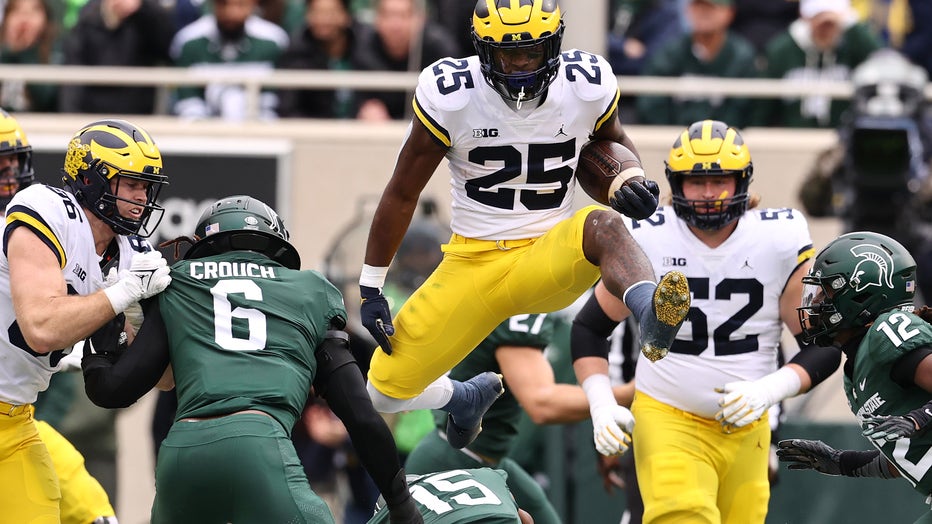 EAST LANSING, MICHIGAN - OCTOBER 30: Hassan Haskins #25 of the Michigan Wolverines jumps over Angelo Grose #15 of the Michigan State Spartans during a first half run at Spartan Stadium on October 30, 2021 in East Lansing, Michigan. (Photo by Gregory

Up 20-14 1:30 to go in the half, Michigan drove into MSU territory. With six seconds left on the clock, Michigan lined up for a field goal but MSU head coach Mel Tucker used all three of his timeouts to try to ice kicker Jake Moody.