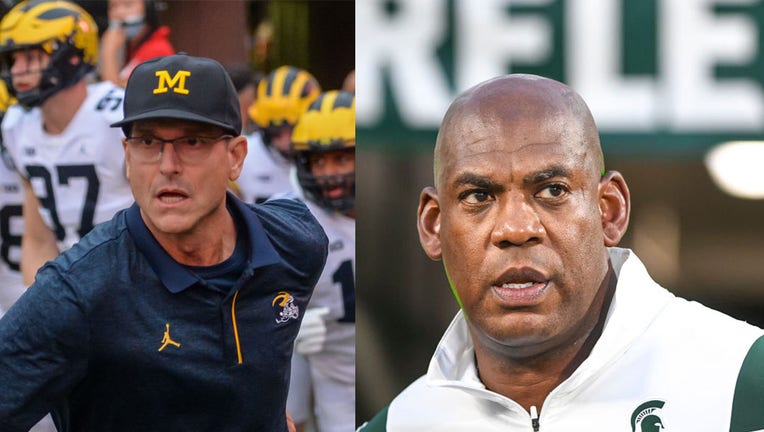 SOUTHFIELD, Mich. (FOX 2) - For the first time since 1964, Michigan and Michigan State are both ranked in the top ten for the annual battle for the Paul Bunyan Trophy. Not only that, they're both 7-0 for the first time in history and are fighting for the top spot in the Big Ten. This game in Lansing - is the biggest we've seen in generations.

It hasn't always been this way. Sure, the Wolverines and the Spartans have gone to battle for more than 120 years but the past two decades or so have seen some major back and forth from each program.

The University of Michigan leads the overall rivalry with 71 wins to Michigan State University's 37. The two teams tied 5 times before ties were officially ended.

Since 1999, the last time both teams were ranked this high for the match-up, the teams have each won 11 games. Starting with that 1999 game, Michigan State was ranked at number 11 when the Wolverines, then number 3 in the nation, went into East Lansing.

The Spartans came away with the upset, their first win in four years against Michigan as quarterback Bill Burke threw for 400 yards and two touchdowns. On the receiving end of 255 of those yards was Plaxico Burress. That set the team's record of receiving yards in a single game. The quarterback on the other side? Future NFL legend Tom Brady - who split time with Drew Henson in that game and still managed to go 30-of-41 for 285 yards and two touchdowns.

Michigan State coach Nick Saban abruptly resigned at the end of the season for the head coaching job at LSU.

In 2000, Michigan would win back the Paul Bunyan Trophy with a 14-0 win over the Spartans. Henson threw for 138 yards but the Wolverines were primarily led by their running back, Anthony Thomas who racked up 175 yards and two scores.

Then came the clock incident, aka ‘Clockgate’, aka ‘Spartan Bob’. Michigan went to East Lansing as the number 6 team in the country and were up 24-20 with three minutes left but the Spartans had the ball at midfield.

A facemask, a couple of penalties, some weird timeout stuff, and the Spartans were stopped short at the one yard line on a Jeff Smoker scramble.

MSU rushed to the line and clocked it with what appeared to be one second on the clock before Smoker threw the game-winning touchdown pass.

But Michigan players, coaches, and even the broadcasters argued that the time should have expired. They argued that Bob Stehlin, aka ‘Spartan Bob’, stopped the clock too early. He's maintained that media outlets timed the play and concluded there would have been time left on the play.

The next year, the Big Ten changed its timekeeping policy to be kept by a neutral official appointed by the conference. A few years later, the Big Ten said that the clock operator acted appropriately and they "could not prove that timer wrong".

After what happened in East Lansing, the Wolverines were leaving no doubt who would win. They routed the Spartans 49-3, the worst loss of MSU's history since 1947. It would kick off a stream of six straight wins for Michigan.

In 2003, MSU had bounced back from a couple of bad years and was up to number 9 in the country. But Michigan pulled out the 27-20 win in East Lansing.

The 2004 version of the rivalry was an absolute classic with MSU taking the number 12 Wolverines into three overtimes in Ann Arbor. Led by standout wide receiver Braylon Edwards, UM came back from being down 27-10 with 8:43 left in the fourth quarter. The two teams traded field goals in the first overtime, then traded touchdowns in the second overtime, until Edwards' third touchdown of the night clinched it for Michigan, winning 45-37.

2005 was another overtime and another win for Michigan. MSU had worked its way up to number 11 in the nation while Michigan came in unranked. But the Wolverines had the momentum and the Spartans kicker missed two field goals - the last of which was in overtime, giving Michigan the 34-31 win.

The 2006 game, unlike the two previous versions, was never in doubt. Michigan shut out Michigan State and led 17-0 at half. They ultimately added two more touchdowns while MSU put up 13 in the second half. The Wolverines got the win, 31-13.

The following year, Michigan State again had the Wolverines on the ropes. They were up 10 with about 7:40 left in the 4th and new head coach Mark Dantonio said after that he "thought we had the game". MSU couldn't hold on as UM scored two touchdowns in 6 minutes for the 28-24 win. It was a transitional year, however, as Lloyd Carr retired after the bowl game, a 41-35 win over Florida in the Capital One Bowl.

With Carr out at UM and Dantonio in at MSU, the tide was turning as the Spartans won the rivalry for the first time since 2001 and the first time in Ann Arbor since 1990. The win for MSU came despite a controversial interpretation of a Wolverine touchdown pass. It wouldn't matter as Michigan State won 35-21. It would kick off a run for MSU of winning 8 of the next 10 matchups.

The 2009 version of the rivalry went into overtime, again, with MSU getting a touchdown and then sealing the win with an interception on Michigan's possession. It was the first time MSU won back-to-back games in the series since 1965-1967.

In 2010, MSU continued winning in Ann Arbor. Coming in at number 17 in the nation, MSU doubled up number 18 Michigan winning 34-17. Dantonio didn't coach the game due to a heart attack he had three weeks before but was at the Big House to congratulate his team.

Michigan State continued its winning ways in 2011, toppling number 11 Michigan 28-14 in East Lansing. The Spartans were ranked number 23 entering the season and were led by 5th-year QB Kirk Cousins and handed first-year coach Brady Hoke their first loss of the season.

Michigan would finally get a win, the first since 2007, in Ann Arbor in 2012 and they did it without scoring a single touchdown. UM was leading 9-7 in the fourth when MSU ran a fake punt and were able to drive down and kick a field goal with 2:11 left in the game. Michigan would not be deterred and Denard Robinson completed a 20-yard pass on fourth down to get the Spartans' 25-yard line. After clocking the ball, Brendan Gibbons drilled the game-winner, giving Michigan a 12-10 win.

2013 was a forgettable one for Michigan. Once again, both teams were ranked in the top 25 but MSU was clearly the better team as the top defense in college football dominated. Michigan finished with negative 48 yards rushing and sacked Devin Gardner four times in the first quarter alone. MSU won 29-6, the most lopsided win since 1967.

The following year wasn't much better unless you count Michigan's first touchdown against MSU since 2011 a success. MSU, the 8th best team in the NCAA, won 35-11. The touchdown from the Wolverines came in the 4th quarter after the game was no longer in doubt. Michigan would fire Hoke after the season and would bring in former quarterback Jim Harbaugh.

What's there to be said about this one that hasn't been said? Michigan had this game. With just 10 seconds left, Michigan was leading 23-20 and it was fourth down. The Wolverines just had to punt the ball away and hold for one play on defense. But the low snap was bobbled by punter Blake O'Neill. He picked up the ball and tried to make the kick but the ball squirted out. Jalen Watts-Jackson grabbed it and cradled it the 38 yards into the endzone to win the game for MSU.

It was a shocking end and a Michigan fan actually had a heart attack on the final play.

Michigan was all the way up to number 2 in the nation. They were 7-0 heading into East Lansing with MSU was 2-6. UM Dominated this one start to finish and were up 27-10 at half. They coasted for second half but it was a surprising 2-point conversion attempt by the Spartans with 1 second left on the clock that led to the exclamation point.

The Spartans scored with 1 second left to get to 30-23 and then went for 2 only to fumble the ball. Jabril Peppers scooped it up and returned it the length of the field for 2 more points for Michigan.

For the first time in the long history of the rivalry, the two teams met under the lights. The wind was howling that night in Ann Arbor and heavy rain made it difficult for either team to move the ball. Michigan came in at number 7 and were the big favorites. However, they turned the ball over five times including three interceptions in the second half. MSU won for the 8th time in 10 years with a final score of 14-10.

Michigan came in at number 6 in the nation and walked out of East Lansing with the 21-7 win. But it was what happened before the game that drew attention. As a few Wolverines were stretching on the field, Michigan State's team linked arms to walk from on end zone to the other. Contact was made and words were exchanged and Harbaugh called the move "total bush league" and claimed Dantonio stood behind the team and smiled.

Dantonio denied it, calling it "B.S."

Michigan linebacker Devin Bush also participated in some of the antics by dragging his cleats on the Spartans' logo at midfield.

2019: The final Dantonio game vs Michigan

Mark Dantonio would coach his final game later in the season but on Nov. 16, 2019, it would be his final game against the rivals in Ann Arbor. Dantonio, who did what many believed to be unthinkable in putting MSU on the map against Michigan, would retire in February of 2020 after finishing the season 7-6 for the second straight year.

Against Michigan, MSU jumped out to a 7-0 lead but could only muster 3 more points the rest of the way. Ultimately, Michigan won 44-10 as Shea Patterson threw for 384 yards and four touchdowns.

The 2020 version of the rivalry was like all other sports at the time - only players and their families were allowed. With the Big House empty, Michigan State came in and upset Michigan 27-24.

To say the win was shocking was putting it lightly. The Spartans were 21 point underdogs to Michigan. But new head coach Mel Tucker had his team rolling with Rocky Lombardi throwing for 323 yards and three touchdowns.

So what happens next? That's the question. With Michigan ranked number 6 and Michigan State ranked 8, the game on Saturday, Oct. 30 is expected to be a thriller.