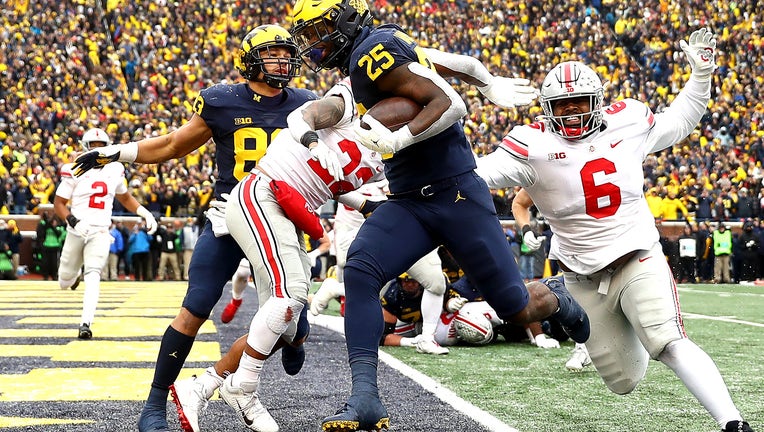 ANN ARBOR, MICHIGAN - NOVEMBER 27: Hassan Haskins #25 of the Michigan Wolverines carries the ball into the end zone for a touchdown in the third quarter against the Ohio State Buckeyes at Michigan Stadium on November 27, 2021 in Ann Arbor, Michigan.

ANN ARBOR, Mich. (FOX 2) - The Michigan Wolverines have snapped an eight-game losing streak to the Ohio State Buckeyes as head coach Jim Harbaugh picks up his first win in the rivalry, winning 42-27.

For the first time since Harbaugh took over, Michigan triumphed over Ohio State, his first win in 7 tries.

Through the blowing snow, the Wolverines were largely carried by running back Hassan Haskins, who scored five touchdowns on 169 yards.

The only touchdown that wasn't scored by Haskins was scored by fellow running back A.J. Henning, who scored one from 14 yards out to cap the first drive of the game.

Michigan controlled the game from start to finish, save for a few minutes in the second quarter when Ohio State went up 10-7.

But the Wolverines had an answer with a 62-yard touchdown drive as Haskins punched in his first of the game. He would do it four more times before the end.

Before halftime, Ohio State kicked a field goal to make it 14-13 as Michigan held in the red zone in the final minutes of the half.

With the huge defensive stop, Michigan came out firing in the second half forcing a 3-and-out on Ohio State's first possession. It took Michigan just 3 plays to score as Blake Corum's 55-yard run set up a 14-yard touchdown for Haskins.

The defense showed up again, stopping Ohio State and the offense kept moving on the next drive, thanks to a J.J. McCarthy pass to Roman Wilson. Michigan drove deeper into Ohio State territory and Haskins punched it in again from a yard out.

Leading 28-13, the momentum all seemed to be on Michigan's side but Ohio State wasn't done, driving 82 yards and pulling with 8 on a TreVeyon Henderson touchdown run.

But Michigan wouldn't be stopped as Haskins scored again five minutes later, this time from 2 yards out. Ohio State answered with a 75-yard drive that included two fourth-down conversions, including one from the Michigan 10-yard-line.

Michigan wasn't going to collapse, however and put the ball in Haskins' hands. He ran it five times on the drive for a total of 63 yards, putting his 5th touchdown on the board from 4 yards out to put the Wolverines up 42-27.

With 1:19 left in the game, the Buckeyes got the ball back but the game was over at that point as they turned it over on downs and Michigan ran out the clock.

Michigan has won 4 in a row since losing to Michigan State, their only loss of the season, and are now in control of their own destiny as the Big Ten Championship looms on Dec. 4. A win there should lock the Wolverines into the team's first College Football Playoff birth.