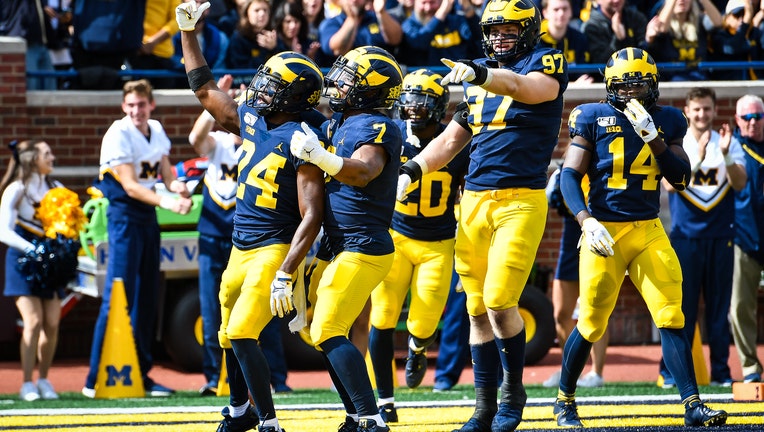 It is one of the perks of being Penn State's starting quarterback. It is also part of the burden.

"I think each week you've got to find something to critique yourself about," Clifford said.

Clifford knows he must improve if the No. 7 Nittany Lions (6-0, 3-0 Big Ten) want to keep their winning streak going Saturday against No. 16 Michigan (5-1, 3-1) and stay in the hunt for a College Football Playoff berth.

Until last week against Iowa, the first-year starter had looked unflappable. Clifford is completing 64% of his passes and has thrown 13 touchdowns with just two interceptions. His running ability has been on display, too. Clifford leads the team with 59 carries and is second with 252 rushing yards.

"Up until that Iowa game, I thought he'd handled things really well," Penn State coach James Franklin said. "Whether that is getting the ball out on time, adjusting the protection to pick up the blitz, whether that is making plays with his feet."

But in Iowa City, Clifford ran into some trouble during the primetime showdown with the Hawkeyes. He held onto the ball too long in the pocket, taking back-to-back sacks to begin Penn State's first possession. Clifford settled in and played mostly mistake-free for the rest of the game. It was the first time Clifford failed to throw for at least 200 yards, but Penn State won 17-12.

"The thing that stands out to me is his confidence. It grows every week," offensive lineman Steven Gonzalez said. "For him to raise his skill level every week has just been really impressive to watch, and he's been playing really well, and we're obviously going to do our job and block our best so that he can do his job well."

That could prove tougher against the Wolverines.

Michigan has the nation's 14th-ranked defense that is ninth against the pass. Michigan has 16 sacks among its 31 tackles for loss over the last three games.

"He's a good quarterback," Michigan linebacker Khaleke Hudson said. "He's got good accuracy. He's got good scrambling ability. You can tell that he trusts the players around him. He gives his receivers chances to go up and get the ball and they've got good receivers to do that for them."

Penn State has used its "White-Out" games as recruiting lures in the past and that'll be no different on Saturday. The team is expecting nearly 300 potential prospects along with their families and coaches. The demands have meant an all-hands-on-deck effort to keep the weekend running smoothly.

"It's a major, major operation," Franklin said. "This is the one game where we have to turn people away. We have waiting lists, and things like that."

Michigan running back Hassan Haskins is coming on just when the Wolverines may need him most. He had a career-high 125 yards rushing on just 12 carries and scored for the first time last week. Haskins played linebacker last season before moving back to running back.

"I'm glad I did that because I feel like I can tell what the defense is doing," Haskins said. "I feel like I got a defensive mindset. I have better vision of the running lanes."

Those might be harder to find against the Nittany Lions, who are allowing a national-best 1.6 yards per carry. Penn State hasn't allowed a player to rush for 100 yards yet this season.

Wolverines coach Jim Harbaugh said Gattis first caught his attention at Western Michigan in 2011 and kept tabs on him as he moved on to be an assistant at Vanderbilt, with the Nittany Lions and at Alabama. Harbaugh said Gattis has a track record of developing players and offensive innovation. During his time with the Nittany Lions, Gattis helped turn out a handful of pros including Chris Godwin, who's now starring for the Tampa Bay Buccaneers and DaeSean Hamilton, the program's all-time leaders in catches.

"I've always been impressed," Harbaugh said. "Now getting to work with him, all of those things have been validated."

A segment of Penn State's fanbase has been vocal about wanting to see the Nittany Lions don all white uniforms for the "White-Out" games. While it is possible, Franklin said he wouldn't be willing to ask visiting teams to pack dark uniforms. He also doesn't want to give up the advantage a crowd clad all in white provides.

"Part of the White-Out is the contrast," Franklin said. "It helps us if everybody else is in white, makes our players stand out on the field for our quarterbacks, those types of things."