U-M Coach Juwan Howard will be suspended for the remaining five games of the season and be fined $40,000.

Wisconsin coach Greg Gard was fined $10,000 for violating the conference's sportsmanship policy, but was not suspended. Howard is expected to be back for the Big Ten tournament, which begins March 9 in Indianapolis.

"Big Ten Conference coaches and student-athletes are expected to display the highest level of sportsmanship conduct," Big Ten Commissioner Kevin Warren said in a statement. "I am grateful for the partnership with Michigan Athletics Director, Warde Manuel and Wisconsin Athletics Director, Chris McIntosh. Our expectation is that the incident yesterday will provide our coaches and student-athletes with the opportunity to reflect, learn and move forward in a manner that demonstrates decorum and leadership on and off of the court."

Howard was upset after Gard called a timeout with 15 seconds left and his team leading by 15 on Sunday.

The altercation began in the postgame handshake line, when Gard grabbed Howard by the arm in an attempt to explain why he called the timeout. Howard yelled "Don't (expletive) touch me!" and put his right index finger in Gard's face as the two began to argue.

"At that point, I felt it was time to protect myself," said Howard, a former NBA player and the reigning Associated Press men's coach of the year.

After the two coaches were separated, Howard swung his right hand and struck Wisconsin assistant Joe Krabbenhoft on the left side of the head with an open hand.

"Someone touched me and I think it was very uncalled for, for them to touch me, as we were verbalizing and communicating with one another," Howard said. "That’s what escalated it."

Players from each side got involved in the skirmish, and video appeared to show Diabate and Neath throwing punches.

Gard said he took the timeout because his backup players had four seconds to get the ball across half court and he wanted to reset the clock to 10 seconds.

"Maybe he doesn’t know the rule, that you get the 10 seconds reset," Gard said. "I wasn’t going to put my players in that type of situation, to have to break a press in four seconds coming in cold off the bench. I wouldn’t do that for a regular group. I can take a timeout. That gives my players the best chance to have success. So that’s where it started. He said, ‘I’ll remember that. I’ll remember that.’ I said, ‘Hey, let me tell you why I did.’ He didn’t want any part of that."

Wisconsin athletic director Chris McIntosh said he quickly contacted Big Ten Commissioner Kevin Warren about the situation after the game, adding that the Badgers had staff members who were "affected and injured," during the altercation. 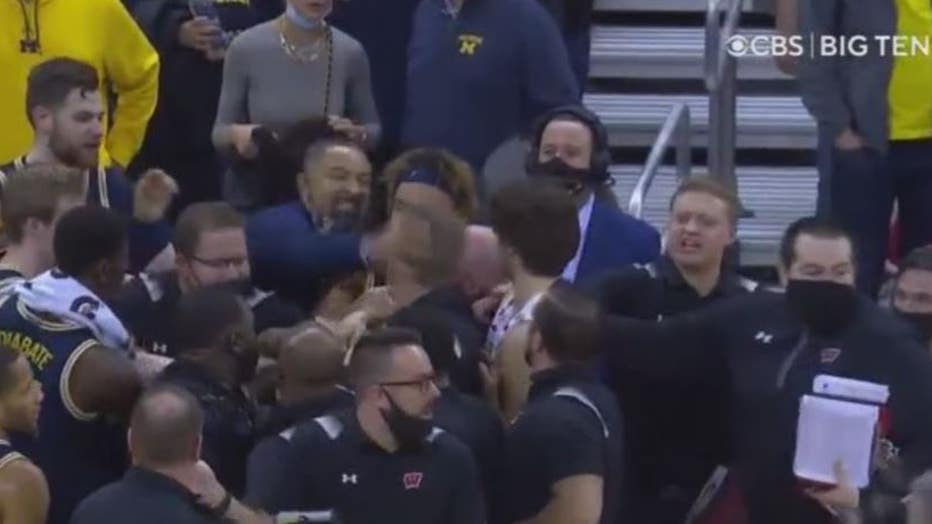 Michigan athletic director Warde Manuel issued a statement saying that he had apologized to McIntosh and that Michigan President Mary Sue Coleman had contacted Wisconsin Chancellor Rebecca Blank "to apologize for the totally unacceptable behavior."

"There is no excuse for any of our staff or student-athletes to get into a physical altercation with others regardless of instigating factors," Manuel said.

Last season, Howard got into a shouting match with then-Maryland coach Mark Turgeon and had to be restrained during the conference tournament. Howard drew two technical fouls and was ejected from a game Michigan ended up winning 79-66.

The Wolverines (14-11, 8-7) started the season with aspirations of contending for the national championship and are closing it trying to earn an NCAA Tournament bid.

Howard is in his third season as Michigan's coach after being part of Michigan’s Fab Five teams three decades ago. Last season, he helped the Wolverines win the Big Ten title, 23 games and reach the NCAA Tournament regional finals.