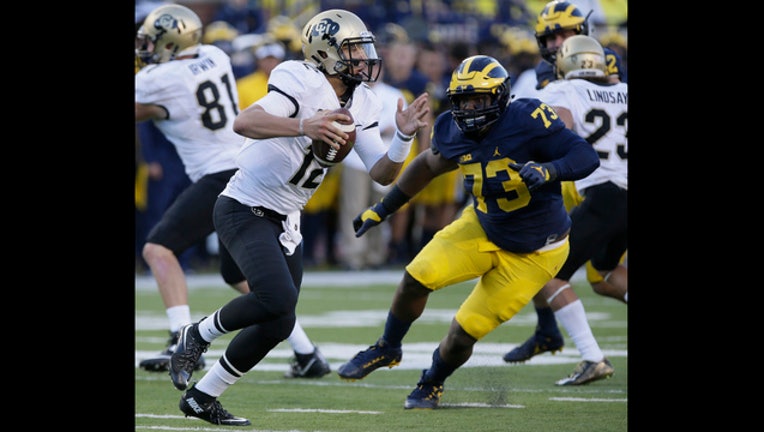 ANN ARBOR, MI - SEPTEMBER 17: Quarterback Steven Montez #12 of the Colorado Buffaloes is pursued by Maurice Hurst #73 of the Michigan Wolverine during the second half at Michigan Stadium on September 17, 2016. (Photo by Duane Burleson/Getty Images)

The comments came shortly after ESPN.com first reported Hurst will not be allowed to participate in drills.

League spokesman Michael Signora confirmed that players can be held out based on certain diagnoses but that he believed Hurst was still in town.

Jeff Foster, president of National Football Scouting, declined to confirm details of what happened because of privacy concerns. But he did tell The Associated Press that six to eight players have been withheld from drills this year for reasons players were not aware of before their arrival.

Foster said that number has stayed relatively consistent over the past 13 years.

Hurst had been rising steadily on mock draft boards.

The 6-foot-2, 280-pound defensive tackle had 59 tackles and 5 1/2 sacks last season. He also had 13 tackles for loss and has been considered one component of a deep class of defensive tackles in this year's draft.

Hurst's father played seven seasons with the New England Patriots as a cornerback.

Word leaked just after defensive linemen and linebackers started talking to reporters at the NFL's annual scouting combine in Indianapolis.

"I just found out in the NFLPA meeting that we just had. He just said, 'Star was your brother?' And I said yeah. He's like, 'Man, I just got the same thing that he did,'" Lowell Lotulelei told reporters. "Obviously I didn't go through it, so I don't really know what he's feeling like. But I kind of understand the disappointment just because my brother trained just like he trained and you're expecting one thing and getting another. I feel for him. It sucks. But I think he'll be fine just like my brother was."

Five years ago, Star Lotulelei arrived at the combine as the expected first pick in that year's draft.

Things changed dramatically after doctors identified an "abnormal" test on his heart.

Lotulelei then sought additional opinions, eventually was cleared to exercise and was taken by Carolina with the 14th overall selection in the 2013 draft. He has missed only four games in five NFL seasons.