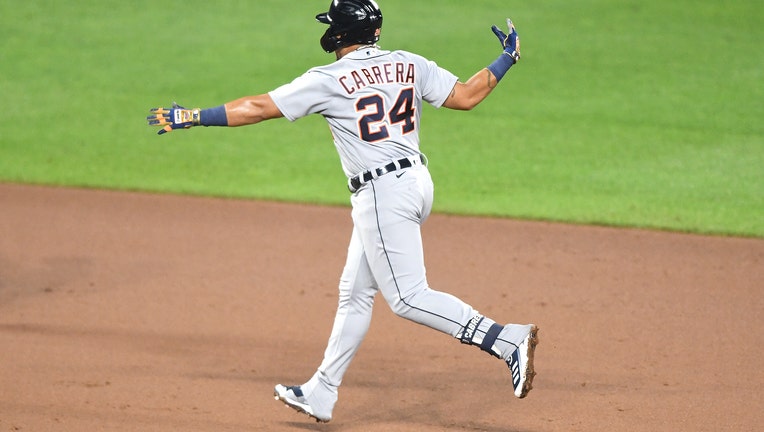 Miguel Cabrera #24 of the Detroit Tigers celebrates hitting his 499th career home run in the fourth inning during a baseball game against the Baltimore Orioles at Oriole Park at Camden Yards on August 11, 2021 in Baltimore, Maryland. (Photo by Mitche

BALTIMORE - Miguel Cabrera is a homer away from 500 — and before he returns to Detroit for the team's next homestand, there's another game to play in Baltimore, but the star won't be in the starting lineup.

The Tigers lineup released around 12:30 on Thursday showed Cabrera getting the day off. The suprise move came one day after manager A.J. Hinch unequivocally said he would be starting.

"He's playing,"  Hinch said, before he was even asked, Wednesday night. "I've talked to him, and we're not going to test baseball fate. We really want him to hit it whenever he's supposed to hit it. Maybe it's (Thursday), maybe it's not."

Cabrera hit his 499th career home run Wednesday night, part of a three-hit night for the Detroit slugger that helped the Tigers beat the Baltimore Orioles 5-2. It was the seventh straight loss for Baltimore, which hosts the Tigers again Thursday.

"Everyone was hoping he can do it in Detroit, but we'll see what happens," teammate Jonathan Schoop said, before being told what Hinch said about the plan for Thursday.

"So we hope he'll do it (Thursday) then," Schoop replied.

Cabrera's solo shot off Matt Harvey (6-11) in the fifth inning opened the scoring. He also had two singles earlier in the game, plus a sacrifice fly in the sixth.

Tarik Skubal (8-10) allowed five hits and walk in six innings in his second straight scoreless outing. He struck out six. Gregory Soto earned his 14th save in 15 chances with a scoreless ninth.

Anthony Santander hit a two-run homer for Baltimore in the eighth.

Baltimore did manage to avoid setting an unpleasant major league record. The Orioles had allowed at least nine runs in each of their previous six games. Only the New York Giants (in 1901) and Seattle Mariners (2000) have done that for seven games in a row.

"Unfortunately we have a tough stretch right now," Harvey said. "I feel like we’ve gotten a lot of hits, but our pitching has given up a couple runs here and there. It happens. You go into slumps hitting, you go into slumps pitching."

Detroit left the bases loaded in the first and third innings. Then Cabrera went deep with one out in the fifth. The homer drew some cheers from the crowd at Camden Yards, and the 38-year-old slugger gave a little pump of his right fist when the ball cleared the wall in left-center field.

Cabrera is trying to become the 28th player in major league history — and the first Venezuela native — to reach 500 homers. His production has fallen off considerably in recent seasons. He hasn’t hit more than a dozen homers since 2017.

Cabrera grounded out in the ninth in his final at-bat.

Detroit's Niko Goodrum hit a two-run double in the fifth, then left the game with a left groin strain.

Baltimore's Cedric Mullins extended his hitting streak to 18 games with an infield single in the third.

The start of the game was delayed 1 hour, 11 minutes by rain.

Harvey had a shutout going until the fifth, but that turned out to be his final inning. He allowed three runs and eight hits for the game.

"He's executing pitches a lot better than he was the first half, and mixing pitches much better," manager Brandon Hyde said.

Tigers: Hinch said Goodrum is headed to the injured list, and Detroit would call up OF Jacob Robson. ... Detroit put OFs Akil Baddoo and Derek Hill on the IL after their collision in Tuesday night’s game. Baddoo went on the seven-day concussion list, and Hill went on the 10-day IL with bruised ribs.

Orioles: 3B Ramón Urías left the game with leg soreness. ... LHP Tanner Scott (sprained left knee) was activated from the IL. ... Hyde said he doesn’t expect 1B/DH Ryan Mountcastle to be activated from the concussion IL on Sunday when he’s eligible to return. ... Hyde said he hopes RHP Tyler Wells (right wrist tendinitis) will be activated Thursday. ... LHP Bruce Zimmermann (left bicep tendinitis) should be activated when it’s time for him to pitch next. He threw five no-hit innings for Norfolk on Tuesday in a rehab start.

John Means (5-3) takes the mound for Baltimore on Thursday against Matt Manning (2-5).