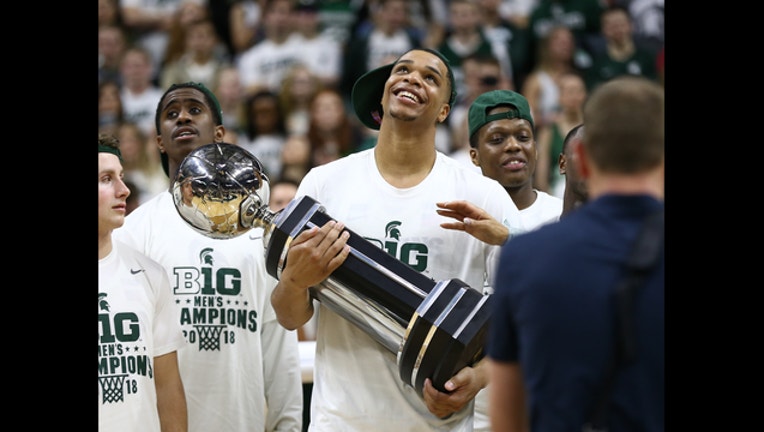 Miles Bridges has been cleared to play by the NCAA, allowing him to help No. 2 Michigan State chase championships.

Documents in a report showed the star forward may have improperly accepted benefits from an agency implicated in a federal investigation involving college basketball corruption .

"After learning of the allegations in yesterday's Yahoo! Sports article , our compliance office conducted a thorough internal review," Michigan State interim athletic director Bill Beekman said in a statement Saturday. "Michigan State presented its findings to the NCAA, and Miles Bridges has been cleared for competition moving forward, beginning Sunday at Wisconsin."

The Spartans (27-3, 15-2 Big Ten) close their regular season against the Badgers (14-16, 7-10) with a shot to win the Big Ten title outright and lock up the top seed at the conference tournament in New York. Bridges scored 19 when Michigan State clinched a share of the Big Ten championship with a win over Illinois on Tuesday night.

Yahoo published expense reports listing a $400 cash advance to Bridges' mother as well as a $70 lunch with the player's parents.

Spartans coach Tom Izzo and Beekman released statements on Friday, saying there's no reason to believe anyone affiliated with the Spartans' basketball team did anything wrong.

Yahoo also reported Michigan State associate head coach Dwayne Stephens was the subject of an email from agent Christian Dawkins to a former NBA agent regarding relationships with Bridges and former Spartan Gary Harris, who plays for the Denver Nuggets.

"Throughout my career as a college basketball coach, I've been committed to following all NCAA rules, including during the recruiting process," Stephens said in a statement sent by the school on Saturday. "Any insinuation to the contrary is false. I'm confident that I have not committed a violation."

The Spartans have a shot to give their Hall of Fame coach his second national title, especially with Bridges in the lineup. He turned down a chance last year to make millions in the NBA to return for his sophomore season. Bridges is averaging 17-plus points and nearly seven rebounds, three assists and one block for a balanced team. He received the most votes on The Associated Press preseason All-America team.