DETROIT - Yoán Moncada had five hits and five RBIs, including a run-scoring single against Kody Clemens, and the Chicago White Sox beat the Detroit Tigers 13-0 on Wednesday for a three-game series sweep.

Moncada, Danny Mendick and Seby Zavala homered for Chicago, which had dropped four of five before arriving in Detroit. José Abreu had four hits and drove in two runs, and Andrew Vaughn had three hits.

"This was a good day — everyone came ready to work," White Sox manager Tony La Russa said. "Early on, we had to make some plays so they couldn't get back into the game." 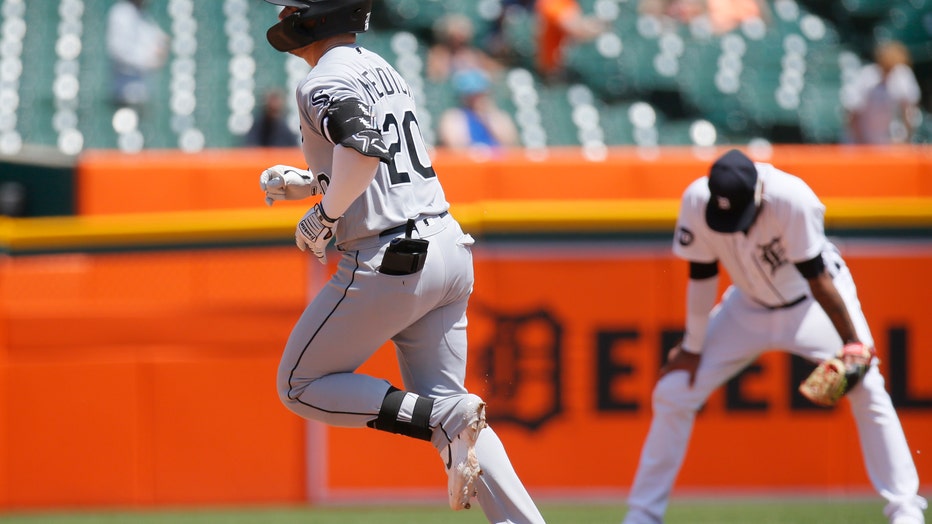 DETROIT, MI - JUNE 15: Danny Mendick #20 of the Chicago White Sox runs the bases past shortstop Jonathan Schoop #7 of the Detroit Tigers after hitting a solo home run in the sixth inning at Comerica Park on June 15, 2022, in Detroit, Michigan. (Photo

The White Sox finished with 22 hits, compared to four for the Tigers. Davis Martin (1-2) pitched 5 1/3 innings of three-hit ball for his first career win.

The Tigers, who have been outscored 33-6 during a four-game losing streak, held a players-only meeting after the game that lasted about 30 minutes.

"It was about a broad range of issues," Eric Haase said. "We just need to play better."

Tigers manager A.J. Hinch gave up on his pitching staff after six innings, using Harold Castro for the seventh, Clemens for the eighth, and Tucker Barnhart for the ninth.

"Our bullpen is pretty taxed and we have seven more games before our next day off," said Hinch, who became the first Tigers manager to use three position players to pitch in one game. "I hate doing that, but I'm trying to give us a chance to win the next game."

It was the pitching debut for the 26-year-old Clemens, whose father, Roger, won seven Cy Young Awards. Kody Clemens was charged with a run and three hits — one more than he has managed in his 23 career at-bats.

"Roger was one of the greatest competitors this sport has ever seen," La Russa said. "We had a lot of battles, and I never enjoyed any of them.

"His kid plays just as hard as he does, but you hate to see a team have to do that for three innings."

"He just couldn't throw strikes," Hinch said. "He hit someone on the first pitch of the game, and that was supposed to be middle-out."

The White Sox grabbed a 3-0 lead on Moncada's third homer with two out in the first. He also singled in Abreu in the eighth and ninth.

"The guys celebrated in the dugout like I had just hit my first career homer," Moncada said. "They know I've been struggling, and that kind of support means everything.

"This was definitely a day that can turn things around."

Abreu and Harrison added RBI singles in the third, and Mendick made it 6-0 with a homer on Faedo’s first pitch of the fourth.

White Sox right-hander Vince Velasquez pitched 2 2/3 innings before Martin came in. Velasquez was activated off the injured list after being sidelined by a strained left groin.

"We didn't want to push Vince too hard, and he said in the third the heat was getting to him a little," La Russa said. "It is always better to get a pitcher one batter early than one batter late, and Martin did a nice job for us."

Zavala's two-run homer made it 9-0 in the fifth, and Adam Engel's triple got the White Sox to double digits in the sixth. Engel was the last Chicago starter to get a hit.

La Russa hadn't managed against a Clemens on the mound since his St. Louis Cardinals lost 7-3 to the Houston Astros on Sept. 24, 2006. Roger Clemens allowed one run in five innings in a no-decision.

"People remember all of the big games we had against him with the Astros, but I hope they also remember when I was in Oakland and he was in Boston," La Russa said. "Those were two great teams."

White Sox: Off Thursday before starting a weekend series in Houston. Lucas Giolito (4-2, 3.88 ERA) is scheduled to start the opener against Houston's Framber Valdez (6-3, 2.64 ERA).