"It was a tremendous, tremendous game, incredible really,’ Harbaugh said after watching Nebraska come back from a 13-0 halftime deficit and take the lead only to see Michigan rally for the win with two late field goals. "We’re enjoying it, we’re enjoying the incredible."

Moody’s fourth field goal came after Wolverines defensive back Brad Hawkins forced Cornhuskers quarterback Adrian Martinez to fumble, returning it 19 yards to the Nebraska 18 to set up the game-winner. 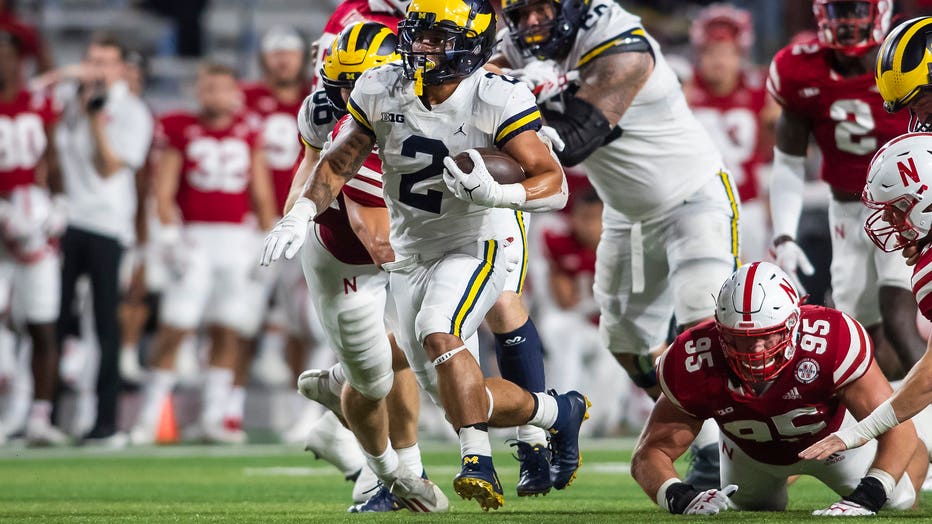 LINCOLN, NE - OCTOBER 09: Michigan Wolverines running back Blake Corum (2) breaks through for extra yardage during the game between the Nebraska Cornhuskers and the Michigan Wolverines on Saturday October 9th, 2021 at Memorial Stadium in Lincoln, NE.

Martinez said he thought the play was over when Hawkins took the ball away from him.

Nebraska (3-4, 1-3) has lost three games in four weeks to ranked teams — No. 6 Oklahoma on Sept. 18, No. 11 Michigan State two weeks ago and Michigan — by a total of 13 points. The Huskers have now lost 14 straight games against ranked opponents, nine of them under coach Scott Frost.

"I can’t imagine the things happening to us all happening to us," Frost said. "I thought tonight was the night. We’ll get there. We’ve got a really good team. I’m so proud of them."

Nebraska came storming back to take the lead in the third quarter after cornerback Deontai Williams picked off the first interception of Michigan quarterback Cade McNamara’s career.

Martinez hit Levi Faulk on a 13-yard swing pass, then ran the two-point conversion to put Nebraska up 22-19 entering the final period.

Michigan countered with 10-play 75 yard drive capped by Blake Corum's 29-yard touchdown run only to be matched by an eight-play, 75-yard Nebraska drive that saw Martinez score from the 5 to make the score 29-26.

The Wolverines moved down the field again, going 69 yard before the drive stalled and Moody hit a 31-yarder to knot the score.

"In this environment, that showed a lot of poise and moxie by our guys," Harbaugh said. "There’s no doubt that they wanted to storm the field, tear down the goalposts. Not on our guy’s watch tonight. That was pretty cool."

Nebraska scored on its first drive of the second half, with Martinez hitting tight end Austin Allen with a 46-yard touchdown pass and, after Michigan went up 19-7 on a Hassan Haskin’s 3-yard run, scored again on a Rahmir Johnson's 41-yard reception.

"When we got that first touchdown, it was the flood gates are open," Martinez said. "We can score on these guys."

Martinez finished 18 for 28 passing with three touchdowns and an interception.

Michigan's Hassan Hawkins finished with 123 yards rushing and two touchdowns, including a 3-yard dive that gave the Wolverines a 13-0 halftime lead.

Michigan hadn’t trailed this season until Faulk’s touchdown gave Nebraska the lead. McNamara’s interception was just the second turnover of the year by the Wolverines.

Saturday’s win was Michigan’s first in Lincoln. The Wolverines tied the Huskers 6-6 in 1911 and lost to the Huskers in Memorial Stadium in 2012.

Nebraska miscues returned to haunt the Huskers In addition to Martinez’s late fumble, Oliver Martin's fair catch in the first trapped Nebraska at its 6. On the next play, Martinez threw an interception that led to Moody’s first field goal. Hawkins’ half-ending touchdown came on the play after a pass interference penalty on Nebraska’s JoJo Domann.

Nebraska is at Minnesota on Saturday.